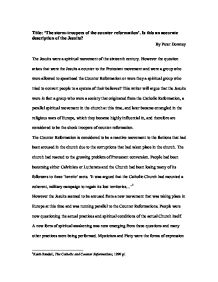 The storm-troopers of the counter reformation. Is this an accurate description of the Jesuits?

Title: 'The storm-troopers of the counter reformation'. Is this an accurate description of the Jesuits? By Peter Downey The Jesuits were a spiritual movement of the sixteenth century. However the question arises that were the Jesuits a counter to the Protestant movement and were a group who were allowed to spearhead the Counter Reformation or were they a spiritual group who tried to convert people to a system of their believes? This writer will argue that the Jesuits were in fact a group who were a society that originated from the Catholic Reformation, a parallel spiritual movement in the church at this time, and later became entangled in the religious wars of Europe, which they became highly influential in, and therefore are considered to be the shock troopers of counter-reformation. The Counter Reformation is considered to be a reactive movement to the factions that had been aroused in the church due to the corruptions that had taken place in the church. The church had reacted to the growing problem of Protestant conversion. People had been becoming either Calvinists or Lutherans and the Church had been losing many of its followers to these 'heretic' sects. 'It was argued that the Catholic Church had mounted a coherent, military campaign to regain its lost territories...'1 However the Jesuits seemed to ...read more.

But within a year the men had resigned to the fact that they could not make it to the Holy Land. Nonetheless their time in Venice was not wasted they had gained a reputation as being great and noble men due to their humane acts towards the unfortunate of the city. The group of ten men then made their way to Rome where they would personally offer their services to the Pope. 'Paul III agreed to their establishment as the Society of Jesus in 1540. What was envisaged by Paul was a small brotherhood of up to 60 men who would carry out charitable works wherever and however he directed them. It was not imagined that this new organization would be more than very limited local significance'.5 It is this writer's belief that the dedication in which the Jesuits showed to the Pope is how they got involved in the Counter Reformation. The Jesuits had pledged their alliance to the Pope and the military like structure Loyola had implemented on the Jesuits meant that the Pope had a dominance over the Society of Jesus. Also the Jesuits firm belief in compliance, due its military structure, means they would definitely oppose the individuality preached by the Protestants. The Jesuits influence in the new European religious-political field was almost instant. ...read more.