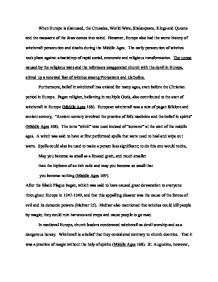 The unrest caused by the religious wars and thereformers exaggerated church with the devil in Europe, stirred up arenewed fear of witches among Protestants and Catholics.

When Europe is discussed, the Crusades, World Wars, Shakespeare, Kings and Queens and the massacre of the Jews comes into mind. However, Europe also had the worst history of witchcraft persecution and deaths during the Middle Ages. The early persecution of witches took place against a backdrop of rapid social, economic and religious transformation. The unrest caused by the religious wars and the reformers exaggerated church with the devil in Europe, stirred up a renewed fear of witches among Protestants and Catholics. Furthermore, belief in witchcraft has existed for many ages, even before the Christian period in Europe. Pagan religion, believing in multiple Gods, also contributed to the start of witchcraft in Europe (Middle Ages 168). European witchcraft was a mix of pagan folklore and ancient sorcery, "Ancient sorcery involved the practice of folk medicine and the belief in spirits" (Middle Ages 168). The term "witch" was used instead of "sorcerer" at the start of the middle ages. A witch was said to have at first performed spells that were used to heal and wipe out warts. Spells could also be used to make a person less significant; to do this one would recite, May you become as small as a linseed grain, and ...read more.

Women were accused and prosecuted of witchcraft more likely than men. " Women are considered to be evil due to their debased history, (The first temptress, Eve, and her imitators)" (Hoyt). The medieval witch-hunts have long been depicted as part of a "war against women" conducted exclusively or overwhelmingly be men, especially those in positions of authority (Salzman). According to the Malleus Maleficarum, women by nature are more evil than men and in order to accept their mental, moral, and physical handicaps, they turn to Satan to satisfy their needs (Mar). In the case of Lady Alice, her son William was not persecuted for witchcraft even though he was accused of it, He denied any knowledge of his mother's wicked deeds, condemned her for them, and promised compensation to all who claimed she had harmed them... the judge ordered the charges against William to be dropped (Meltzer 74). However, when Lady Alice's maid denied any knowledge of her witchcraft and had seen her do strange things though, she was still executed. Women were slaughtered for all kinds of futile reasons, from having freckles, a birthmark, living longer than some expected, or paying tribute to Mother Earth and the goddess of religions. ...read more.

their own children into the marriage and when they died, his children did not get any of their father's property or money (Meltzer 65). The same can be said about Joan of Arc. It was not until she crowned the Charles VII and defeated many of the English armies that she was considered a witch and heretic. Joan was feared because of her military and political powers that raised the cry of "witch" (Meltzer 75). In addition to that, the priests, clergy men, and other members of the church also feared Joan because she was the one hearing voices from saints and God, and they were not. They could have started to believe that she would be able to take over their positions in society and the only way to secure their positions was to get rid of her. In summation, witchcraft was an offense to society during the Middle Ages. Being accused of witchcraft would ultimately lead to ones demise. A witch can be identified as the visible agent of evil on earth, and someone who goes against the church and the sayings of the Bible. Many of the accusations against people were due to the church reforms and religious wars, and society itself. ...read more.