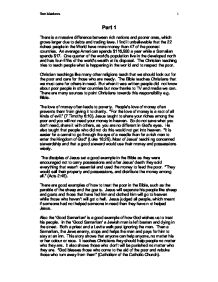 There is a massive difference between rich nations and poorer ones, which grows larger due to debts and trading laws.

Part 1 There is a massive difference between rich nations and poorer ones, which grows larger due to debts and trading laws. I find it unbelievable that the 22 richest people in the World have more money than 47 of the poorest countries. An average American spends $116,500 a year while a Somalian spends $17. One quarter of the world's population live in the developed north and has four-fifths of the world's wealth at its disposal. The Christian teaching tries to teach people what is happening in the world and to respect the poor. Christian teachings like many other religions teach that we should look out for the poor and care for those who are needy. The Bible teaches Christians that we must care for others in need. But when it was written people did not know about poor people in other countries but now thanks to TV and media we can. There are many sources to point Christians towards this responsibility e.g. Bible. The love of money often leads to poverty. People's love of money often prevents them from giving it to charity. "For the love of money is a root of all kinds of evil." (7 Timothy 6:10). Jesus taught to share your riches among the poor and you will not need your money in heaven. ...read more.

Christians have always been taught to give something to those who are worse off. "For I was hungry and you gave me something to eat." (Matthew 21:35-36) Christians can either join or just give money or clothing to a charity. There are many different charities, the main ones being Christian Aid, CAFOD and TEAR Fund. As early as the Bible people have given money to charities. "On the first day of every week, each one of you should set aside a sum of money" (Corinthians 16:2). God doesn't worry if someone does not give the same amount of money as another; it is to do with the percentage of their wealth. There are different ways for Christians to collect their money. Some Christians give money to the church wherever they go to the services. Some give money to the charity collecting boxes in shops or door-to-door collectors. Some Christians keep collection boxes and put money in it when they think of the poor. As well as giving, some work for a charity. This may include working at a charity stall or knitting clothes for Oxfam. Jesus taught that the size of the gift did not matter; it was the generous spirit behind the gift that mattered. ...read more.