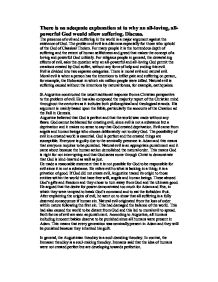 There is no adequate explanation at to why an all-loving, all-powerful God would allow suffering. Discuss.

There is no adequate explanation at to why an all-loving, all-powerful God would allow suffering. Discuss. The presence of evil and suffering in the world is a major argument against the existence of God. The problem of evil is a dilemma especially for those who uphold of the God of Classical Theism. For many people it is the horrendous depth of suffering and the extent of human selfishness and greed that makes the concept of a loving and powerful God unlikely. For religious people in general, the devastating effects of evil, asks the question why an all-powerful and all-loving God permit the creations created by God suffer, without any form of help and ending this evil. Evil is divided into two separate categories. There is moral evil and natural evil. Moral evil is when a person has the intentions to inflict pain and suffering on person, for example, the Holocaust in which six million people were killed. Natural evil is suffering caused without the intentions by natural forces, for example, earthquakes. St.Augustine constructed the usual traditional response from a Christian perspective to the problem of evil. He has also composed the majority report of the Christian mind throughout the centuries as it includes both philosophical and theological strands. ...read more.

If humans were made ready perfect there would be no free will. This means that the natural order had to be created with the possibility of causing harm, humans to be imperfect and God to stand back from the creations. Humans disobeyed God, which caused suffering and God cannot remove evil to compromise the freedom of humans. Evil and suffering will be overcome and everyone will be developed into God's likeness. Irenaeus said that God was somewhat responsible for evil. God's responsibility extended to create humans imperfect and made it their task to develop into perfection. Irenaeus said that humans were created in God's image and later that they would be developed into God's likeness. Being in God's image is to have intelligence, morality and personality. Completion would be gained upon transformation into God's likeness. He argued that those who say that God should never allow evil to happen is to say God should take away humanity. If God was to intervene every time an evil act occurred, there would be in fact not any freedom to commit evil. John Hick took an Irenaeus stance. He believed that ready-made goodness is not as valuable as goodness developed freely. ...read more.

Religious people object to it because it contradicts religious texts including the Bible. It makes moral behaviour worthless if everyone is to be rewarded with Heaven. People can accept from the counterfactual hypothesis that the process of soul making could not take place in a paradise. Does the world need to contain the extent and severity of suffering found in such events that has the killing of millions? Another problem is that love can never be expressed by allowing any amount of suffering no matter what the reason. D.Z. Phillips argued that it would never be justified to hurt someone in order to help them. When considering the magnitude of the suffering in the world, the problem is more serious. Those people who already have faith in God, the responses will be different. Reference can be made to God's goodness to humanity, proved in gifts such as messengers or eternal life and the like. Some of the responses adjust the nature of God and the nature of evil. Attempts have been made to harmonise evil with the existence of God of Classical Theism. Each theodicy has its strengths and its weaknesses. The problem of evil was a major argument against the existence of God. It depends upon the beliefs of the subject. ...read more.