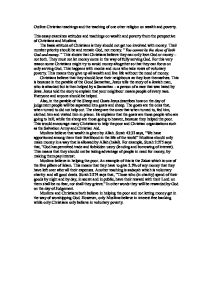 This essay examines attitudes and teachings on wealth and poverty from the perspective of Christians and Muslims.

Outline Christian teachings and the teaching of one other religion on wealth and poverty.

This essay examines attitudes and teachings on wealth and poverty from the perspective of Christians and Muslims.

The basic attitude of Christians is they should not get too involved with money. Their number priority should be and remain God, not money. “You cannot be the slave of both God and money.” This shows that Christians believe they can only love God or money – not both. They must not let money come in the way of fully serving God. For this very reason some Christians might try to avoid money altogether so that they can focus on only serving God. This happens with monks and nuns who take vows of voluntary poverty. This means they give up all wealth and live life without the need of money.

Christians believe that they should love their neighbours as they love themselves. This is because in the parable of the Good Samaritan, Jesus tells the story of a Jewish man, who is attacked but is then helped by a Samaritan – a person of a race that was hated by Jews. Jesus told the story to explain that your neighbour means people of every race. Everyone and anyone should be helped.

Also, in the parable of the Sheep and Goats Jesus describes how on the day of judgement people will be separated into goats and sheep. The goats are the ones that, when turned to did not help out. The sheep are the ones that when turned to, fed him, clothed him and visited him in prison. He explains that the goats are those people who are going to hell, while the sheep are those going to heaven, because they helped the poor. This would encourage many Christians to help the poor and Christian organisations such as the Salvation Army and Christian Aid.

Muslims believe that wealth is given by Allah. Surah 43:32 says, “We have apportioned among them their livelihood in the life of the world” Muslims should only make money in a way that is allowed by Allah (halal). For example, Surah 2:275 says that, “God has permitted trade and forbidden usury (lending and borrowing of interest). This means that they should not be taking advantage of people in need for money, by making them pay interest.

Muslims believe in helping the poor. An example of this is the Zakat which is one of the five pillars of Islam. This means that they have to give 2.5% of any money that they have left over after all their expenses. Another teaching is sadaqah which is voluntary charity- and all good deeds. Surah 2:274 says that, “Those who (in charity) spend of their goods by night and by day, in secret and in public, have their reward with their Lord: on them shall be no fear, nor shall they grieve.” In other words they will be rewarded by God on the day of Judgement.

Muslims and Christians both believe in helping the poor and not letting money get in the way of worshipping God. However, only Muslims believe in interest free banking while only Christians only believe in voluntary poverty.