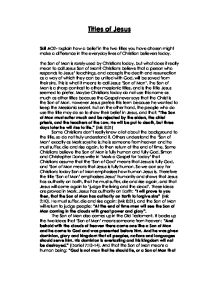 Titles of jesus A02

Skill AO2- Explain how a belief in the two titles you have chosen might make a difference in the everyday lives of Christian believers today.

The Son of Man is rarely used by Christians today, but what does it really mean to call Jesus Son of Man? Christians believe that a person who responds to Jesus’ teachings, and accepts the death and resurrection as a way of which they can be united with God, will be saved from their sins. This is what it means to call Jesus ‘Son of Man’. The Son of Man is a sharp contrast to other messianic titles, and is the title Jesus seemed to prefer. Maybe Christians today do not use this name as much as other titles because the Gospel never says that the Christ is the Son of Man. However Jesus prefers this term because he wanted to keep the Messianic secret. But on the other hand, the people who do use the title may do so to show their belief in Jesus, and that: “The Son of Man must suffer much and be rejected by the elders, the chief priests, and the teachers of the Law. He will be put to death, but three days later he will rise to life.” (Mk 8:31)

Some Christians don’t really know a lot about the background to the title, so do not truly understand it. Others understand the ‘Son of Man’ exactly as Mark says he is; he is someone from heaven and he must suffer, die and rise again, to then return at the end of time. Some Christians believe the Son of Man is fully human and fully God. Simon and Christopher Danes write in ‘Mark a Gospel for Today’ that Christians assume that the ‘Son of God’ means that Jesus is fully God, and ‘Son of Man means that Jesus is fully human. So we can say for Christians today Son of Man emphasises how human Jesus is. Therefore the title ‘Son of Man’ emphasises Jesus’ humanity and shows that Jesus has authority on Earth, that he must suffer, die and rise again, and that Jesus will come again to ‘judge the living and the dead’. These ideas are proved in Mark. Jesus has authority on Earth: “I will prove to you then, that the Son of Man has authority on Earth to forgive sins” (Mk 2:10). He must suffer, die and rise again: (Mk 8:31), and the Son of Man will return to judge people: “At the end of time men will see the Son of Man coming in the clouds with great power and glory”.

The Son of Man also comes up in the Old Testament. It backs up the two ideas that ‘Son of Man’ means someone from heaven: “And behold with the clouds of heaven there came one like a Son of Man and he came to God and was presented before him. And he was given dominion, glory and kingdom that all peoples, nations and languages should serve him. His dominion is everlasting and his kingdom will not be destroyed.” (Daniel 7:13-14). And that the Son of Man means a human being: “God is not man that he should lie, or a Son of Man that he should repent.” (Numbers 23:19), and “he said to me ‘Son of Man, stand upon your feet and I will speak with you’” (Ezekiel 2:1).

Overall we can say, from these ideas, that for Christians today, ‘Son of Man’ emphasises how human Jesus is. So Christians understand form Mark and the Bible that God the Son came down from heaven, suffered and died on the cross to rid us of our sins. So we can do what God wanted; spread Jesus’ message to everyone. The title affects the everyday lives of Christians and the people who they spread the message to.

The Son of God is a lot harder to explain. Christians today usually think ‘Son of God’ shows that Jesus is not just the Messiah, but that he is God himself, made human (God the Son). ‘Son of God’ is the shorthand way of referring to the Incarnation. How Jesus ‘suffered, died and rose again’ (Mk 8:31). As said in A01, the Nicene Creed also sums up the meaning of the Son of God. The Nicene Creed dates from the 4th century and some parts are earlier still. It is a written statement of belief, and it says about Jesus as the Son of God:

“We believe in one Lord, Jesus Christ,

the only Son of God,

eternally begotten of the father,

God from God, Light from Light,

of one Being with the Father.

Through him all things were made.

by the power of the Holy Spirit

and was made man.”

This also brings up the issue that Jesus’ mother, Mary was a virgin. She became pregnant because of a miracle, by God the Holy Spirit. So Jesus is Gods son in a slightly more literal way too. Jesus was a human being, but he had no human father. God instead provided the genetic material, and through a miracle, Jesus was born. So, if you were to say Jesus has a father, his father would be God. Therefore he is God’s Son and through this, Christians today can show their belief in the Nicene Creed by calling Jesus the Son of God.

Also by calling Jesus ‘Son of God’, this can also be linked to the Anointed One, the Messiah or Christ, or the Son of David. It is a widely used title now, because there is no danger that the title will be misunderstood, or that Jesus would be made out to be a leader of a rebellion against the Romans. It was not used very widely in Mark because Jesus wanted to keep his Messianic Secret, so he would not be mistaken as a war leader. But after Jesus’ death and resurrection, there was no fear of using it. This is shown in one of the most important verse in Mark (Mk 15:39) “The army officer who was standing there in front of the cross saw how Jesus had died. ‘This man really was the Son of God!’ he said.” This quote is also trying to show people that even gentiles can believe in God, for that was whom army officer was representing.

Jesus suffered and died so that people could be reunited with God if they turned away form their sins. Jesus said in Marks Gospel and in the Nicene Creed that he would return at the end of time to judge the living and the dead. So Christians believe when we die we will be judged by Jesus, so how we act now, while we are living, will decide our fate in Heaven. Therefore the title ‘Son of God’ reminds us of how we must obey God’s laws, turn away form our sins and think about our actions in our everyday lives. That is how using the title ‘Son of God’ makes a difference in the everyday lives of Christians today.