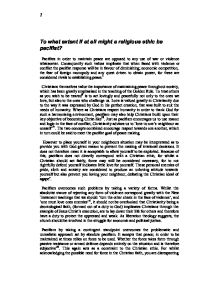 To what extent if at all might a religious ethic be pacifist?

To what extent if at all might a religious ethic be pacifist? Pacifists in order to maintain peace are opposed to any use of war or violence whatsoever. Consequently such values implicate that when faced with violence or conflict the pacifist response will be in favour of diminishing; economic competition, the fear of foreign monopoly and any quest driven to obtain power, for these are considered rivals to establishing peace.i Christians themselves value the importance of maintaining peace throughout society, which has been greatly emphasised in the teaching of the Golden Rule. To treat others as you wish to be treatedii is to act lovingly and peacefully not only to the ones we love, but also to the ones who challenge us. Love is valued greatly in Christianity due to the way it was expressed by God in his perfect creation, that was built to suit the needs of humanity. Where as Christians respect humanity in order to thank God for such a harmonising environment, pacifism may also help Christians build upon their key objective of becoming Christ-likeiii. Just as pacifism encourages us to use reason and logic in the face of conflict, Christianity advises us to 'love to one's neighbour as oneself'iv. The two concepts combined encourage respect towards one another, which in turn could be said to meet the pacifist goal of peace making. However to place yourself in your neighbours situation may be interpretated as to provide you with God given reason to prevent the making of irrational decisions. It does not therefore mean it is acceptable to allow yourself to be exploited. ...read more.

To reach this higher plain of the kingdom of God requires a Christian to be of distinct holiness and to have led a life most similar to Christ, which would implicate that a Christian ethic should most definitely be adopting the pacifist stance.vi Due to the ever-changing attitudes of Christianity, it becomes difficult to define a Christian ethic as pacifist. The diversity in decisions should not necessarily be considered a negative point, for such diversity in authority and interpretation make Christianity fitting to our ever growing, learning society. The Old Testament presentation of God is of an angered, biased God who uses violence as a means to solution, as shown in his attack on the Amorites. This however should not be perceived as a justification of war, for God is well beyond our understanding, it is not ours to reason why, and because it is down to interpretation alone it may act simply as an illustration to the powerfulness of God through a liberal Christians interpretation or the brutal nature of God if viewed from a fundamentalists literal, unyielding interpretation, to which such a circular argument holds no solution. Such teachings should not be taken at fundamentalist value alone, for where Moses in the Old Testament is presented as killing an Egyptian soldier as revenge for abusing a Hebrew slavex it is done in the name of justice. This holds implication s for pacifism by suggesting that force is sometimes necessary, by acknowledging such a value you are denying aspects of pacifism but not in its whole entirety. ...read more.

For instance a criteria of war as only a last resort is a contradictory statement, for you can always resort to something else. As the Society of Quakers assert, everybody should overcome all that causes conflict between people, this may never be done through force.vi When re-examining the question of whether a Christian ethic should be pacifist, it is a self-contained argument. Christianity throughout its history has adopted a pacifist approach, it is therefore plausible for it to be part of a Christian ethic because pacifism acts as a doctrine of peace and is therefore in compliance with the central issues of the New Testament. However the real question is, should a Christian ethic be pacifist? Where Christianity is already grounded in such principles it is unnecessary for it to adopt an absolute pacifist response, as it should be down to the individual to interpret the teachings in their own way, as has been throughout the majority of Christian teachings. Peace is an entirely subjective man made concept; it cannot be defined and therefore is the responsibility of each individual to act in accordance with his or her own view. Whilst this may potentially cause a society revolved in chaos, if every Christian has truly acted out of their God given reason then they have done the right thing and fulfilled God's divine plan, for it is not ours to reason why. i http://encarta.msn.com/find/concise.asp?ti=01A9OOO ii (Matt.7: 12) iii Class notes iv (Matt. 22: 34) v 'Blackwell Companion to Christian Ethics', 1991,ch8, page98, 0631187855 vi (Matt.5: 1-48) vii 'Issues of life and death', Michael Wilcockson, Hodder and Stoughton, 1999,0340724889 viii http://encarta.msn.com/find/concise.asp?ti=0260D000 ix http://mb-soft.com/believe/txn/pacifism.htm x (Exodus 2:11-15) xi http://www.themystica.com/mystica/articles/g/gnosticism. ...read more.