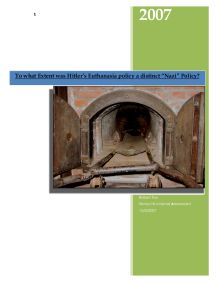 At first glance it looks normal; it would not seem likely that the showers would emit pure Carbon monoxide gas. Another use of this source is the portrayal of the Nazi's tactics to lure people into these institutions. Another key usefulness for this sources shows that the idea of showers releasing gas did not begin in the concentration camps but in the various Euthanasia institutions. the limitations of this source is that is shows only part of the chamber and thus cannot get a clear image of how convincing these "shower rooms" actually were and also it does not clearly show how many people could fit in such room to be killed. Also although this is a previous gas chamber the picture was taken recently and there may have been alterations done to the chambers to slide the thoughts of many people into thinking one way. Source B: The video source (refer to appendix 8) is Firsthand account of Robert Wagemanns near to death experience at the euthanasia camps. It is highly useful in respect to it being a primary source which is a significant bonus for a historian. ...read more.

In Karl Brandt's, head of the T4 opinion, Hitler individually permitted gas as being the most "humane" process of mass extermination.14 Section E In conclusion to all the evidence provided that the Euthanasia program was a great indicator for the later establishment of the concentration camps for the Jews. In my opinion the Euthanasia was to an extent not a distinctive Nazi policy but merely a quick and easy cover for Hitler's hatred for Jews. What Hitler did certainly did not follow the definition for euthanasia and can be said that he manipulated it to his own version of euthanasia but the original euthanasia cannot be credited to the Nazi policy. The involuntary euthanasia of children and adolescents who were mentally or physically challenged, although considered murder was still in the constraints of the euthanasia policy. Hitler's aims for this was not the extermination of mentally disabled but more the cleansing of Jews from the German infrastructure. Hitler intended on establishing an "arichen Herrenvolk" 15which was known as the Aryan race, the race without impure blood or disabilities. He did so once in the late 1930's and the same idea carried through to the concentration camps for Jews later on. ...read more.