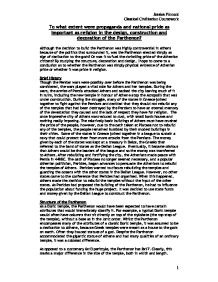 To what extent were propaganda and national pride as important as religion in the design, construction and decoration of the Parthenon?

To what extent were propaganda and national pride as important as religion in the design, construction and decoration of the Parthenon? Although the decision to build the Parthenon was highly controversial in Athens because of the politics that surrounded it, was the Parthenon erected simply as sign of dedication to the gods? Or was it to fuel the dwindling pride of the Athenian citizens? By studying the structure, decoration and design, I hope to come to a conclusion as to whether the Parthenon was simply physical evidence of Athenian pride or whether it was pride in religion. Brief History Though the Persian wars were possibly over before the Parthenon was being considered, the wars played a vital role for Athens and her temples. During the wars, the armies of Persia attacked Athens and sacked the city leaving much of it in ruins, including the new temple in honour of Athene atop the Acropolis that was under construction. During the struggle, many of the states in Greece joined together to fight against the Persians and decided that they should not rebuild any of the temples that had been destroyed by the Persians to have an eternal memory of the devastation they caused and the lack of respect they have for religion. The once impressive city of Athens was reduced to dust, with small basic houses and nothing really imposing. The relatively basic buildings of Athens must have crushed the pride of the people, however, due to the oath taken at Plataea not to rebuild any of the temples, the people remained humbled by their modest buildings in their cities. ...read more.

Decoration The decoration on the Parthenon is one of the most elaborate sculptural masterpieces analysed in history. The intricate sculptures are made entirely out of marble, just as the rest of the structure of the Parthenon. Along the frieze there are ninety-two carved metopes around the length of the temple. There was also a continuous decorated frieze inside the peristyle above both of the pronaos' of the Parthenon and along the side walls of the cella, which was very uncommon for Greek temples. This is often considered to be another show of wealth and high workman ship because the continuous frieze is inside the peristyle. The pediments are filled with complete carved marble statues. Into the triangular pediments of the roof, there were sculptures depicting the birth of Athene on the east pediment, and on the west pediment was the portrayal of the competition between the god Poseidon and the goddess Athene as they contested for Athens. In my opinion, the birth of Athene seems to imply that the gods are incredibly important. Supporting the image are the gods and goddesses witnessing the birth of Athene. However, the sculpture is on the pediment that is at the front of the temple yet it is not the first pediment that you see. Although the pediment at the back of the temple shows the contest for Athens, it is however the first pediment that is in view as you advance towards the temple. ...read more.

The word "Parthenon" means "virgin" and the temple was named after Athene's virtue. The work, effort and money put into the Parthenon could be seen as religious piety to the pantheon and in particular, to the patron goddess Athene. Conclusion I think that the answer to the title is slightly ambiguous. I believe that Pericles wanted to see his fair city become a shining monument to the people and win favour as a politician. But I think that it could be seen as cynicism of the people today that people of ancient Greece could be so dedicated to religion and chose to spend a great deal of money on so huge a project. Perhaps they wanted to show their piety and appreciation to the gods that after so many violent wars, their city was still here. So to conclude, I believe that national pride was hugely important in the building of the Parthenon, and although it seems that religion took a lower priority, it may have been just as important as national pride in the building of the Parthenon. Bibliography - Books D'Agostino, Bruno (1974) Monuments of Civilisation Greece, Readers Digest, London Connolly, Peter; Dodge, Hazel (1998) The Ancient City: Life in Classical Athens and Rome Oxford University Press, Oxford Jenkins, Ian (1994) The Parthenon Frieze, British Museum Press, London Peach, Susan; Millard, Anne (2003) The Greeks, Usborne Publishing, London Woodford, Susan (1981) The Parthenon Cambridge University Press, Cambridge Beard, Mary (2002) The Parthenon Profile Books, London Bibliography - Websites http://academic.reed.edu/humanities/110Tech/Parthenon.html http://www.pbs.org/empires/thegreeks/background/29a_p1.html http://www.pbs.org/empires/thegreeks/characters/pericles_p6.html www.perseus.tufts. ...read more.