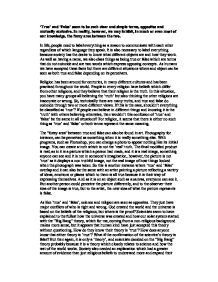 'True' and 'False' seem to be such clear and simple terms, opposites and mutually exclusive. In reality, however, we may inhibit, in much or even most of our knowledge, the fuzzy area between the two.

‘True’ and ‘False’ seem to be such clear and simple terms, opposites and mutually exclusive. In reality, however, we may inhibit, in much or even most of our knowledge, the fuzzy area between the two.

In life, people need to label everything as a reason to communicate with each other regardless of which language they speak. It is also necessary to label everything because society has the desire to know what different objects are and how they work. As well as having a name, we also class things as being true or false which are terms that do not coincide and are two words which express opposing concepts. As humans we have accepted these facts but there are different situations where and object can be seen as both true and false depending on its perceivers.

Religion has been around for centuries, in many different cultures and has been practised throughout the world. People in every religion have beliefs which differ from other religions, and they believe that their religion is the truth. In this situation, you have many groups all believing the ‘truth’ but also thinking the other religions are inaccurate or wrong. So, technically there are many truths, and true and false do coincide through two or more different views. If this is the case, shouldn’t everything be classified as ‘true’? If people can believe in different things and knowing it is the ‘truth’ with others believing otherwise, then wouldn’t this confusion of ‘true’ and ‘false’ be the same in all situations? For religion, it seems that there is either no such thing as ‘true’ and ‘false’ or both terms represent the same meaning.

The “fuzzy area” between true and false can also be found in art. Photography for instance, can be perceived as something when it is really something else. With programs, such as Photoshop, you can change a photo to appear nothing like its initial image. You can create a truth which is not the ‘real’ truth. The final modified product is real, as in it is a picture which a person had made, and it is a real image, something anyone can see and it is not in someone’s imagination, however, the picture is not ‘true’ as it displays a non truthful image, not the real image of how things looked when the photograph was taken. So this is another instance where ‘true’ and ‘false’ overlap and it can also be the same with an artist painting a picture reflecting a variety of ideas, emotions or places which to them is all true because it is their way of expressing themselves. And as it is on an object such as a canvas, everyone can see it. But another person could perceive the picture differently, and to the observer their idea of the image is true, but to the artist, the new idea of what the picture represents is false.

As like ‘true’ and ‘false’, science and religion are seen as opposites. They just have major conflicts of who is right and wrong. God created the world and the universe is based on the beliefs of the religious, but where is the proof? Scientists seem to have explained to the fullest how the universe was created and how our solar system started with the “Big Bang” theory, which for me, coming from a non-religious background makes more sense, but it appears that human kind have just accepted this theory without questioning. How do they know their theory is ‘true’? How does anyone know that either theory is ‘true’? What if the confirmation of the scientist’s theory is false? But then again, it is only a ‘theory’, and scientists decided on the “Big Bang” theory probably because it is a theory which closely relates to science and how the rest of the world works. Society also needed an explanation which had a greater amount of evidence than just religious beliefs to understand more and expand their knowledge. Even if neither science nor religion is true, people can make up their own minds, deciding what’s true and false according to their background and other external influences.

What a person knows, they believe that what they know is true. They have gained this knowledge by past experiences, what they have been told, how they feel towards a situation and all these ways of knowing establish their belief in what is true and false. Their views and beliefs may differ from everyone else’s but to the individual what they know is true. For any one thing, it can have many appearances which give people the freedom and opportunity to decide what it is, how it got there, why it’s there and so on. The difference between true and false depends on the person believing or disbelieving it by their gathered information of their ways of knowing through perception, emotion, language and reason.