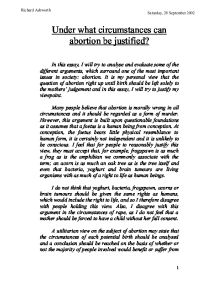 Under what circumstances can abortion be justified?

Under what circumstances can abortion be justified? In this essay, I will try to analyse and evaluate some of the different arguments, which surround one of the most important issues in society: abortion. It is my personal view that the question of abortion right up until birth should be left solely to the mothers' judgement and in this essay, I will try to justify my viewpoint. Many people believe that abortion is morally wrong in all circumstances and it should be regarded as a form of murder. However, this argument is built upon questionable foundations as it assumes that a foetus is a human being from conception. At conception, the foetus bears little physical resemblance to human form, it is certainly not independent and it is unlikely to be conscious. I feel that for people to reasonably justify this view, they must accept that, for example, frogspawn is as much a frog as is the amphibian we commonly associate with the term; an acorn is as much an oak tree as is the tree itself and even that bacteria, yoghurt and brain tumours are living organisms with as much of a right to life as human beings. ...read more.

The teachings of Judaism state that a foetus does not become a person, until birth, which is a view that I fundamentally agree with as I think that because the foetus is not physically an independent being it is part of the mothers' anatomy and is under her responsibility therefore it should be her judgement (where she is in a sound state of mind) to decide what happens to the foetus. Many religious teachings contradict this, Roman Catholicism for one, which rests its principle on the concept of a soul attached to the body and that from conception, a soul is created and therefore to dispense of the foetus is a sin. Again, this appears to be contradictory to my beliefs because I feel that if the soul (whether it be a physical form, a divine concept or a state of mind) does exist then while the foetus is physically attached to part of the mothers' body, the souls (if they exist) are also in some way connected. A deontological approach to the subject of abortion might be that it is the mothers' duty to preserve life at all costs (in a similar way to the Hippocratic oath) ...read more.

For example, as I have mentioned, in the circumstances of rape, an abortion may be for the best, as it will ultimately cause the mother less grief. If a person is dying of a degrading and terminal disease and they have given their consent, it may cause them less pain to actively or passively terminate their life prematurely. However, in all cases for euthanasia, I think that it must be a voluntary act on behalf of the involved person and if they are unable to give consent, then the act must not go ahead. In conclusion to the analysis and evaluation of these arguments, I retain my original view but accept that there are many different and valid arguments on the subject of abortion each with their own strengths and weaknesses. I think that until the foetus becomes physically a completely independent being, i.e. at birth, then it must be the mother who decides whether or not to have an abortion because until birth, the foetus is still in reality a part of the mother's body and therefore it is up to her what happens to it. I do not take into account the deontological approach and the concept of the soul, because I have not as yet come across conclusive evidence to convince me that these are concepts that need to be accounted for in modern society. 1 ...read more.