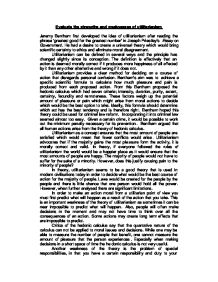 Evaluate the strengths and weaknesses of utilitarianism Jeremy Bentham first developed the idea of utilitarianism after reading the phrase 'greatest good for the greatest number' in Joseph Priestley's Essay on Government. He had a desire to create a universal theory which would bring scientific certainty to ethics and eliminate moral disagreement. Utilitarianism can be defined in several ways and the principle has changed slightly since its conception. The definition is effectively that an action is deemed morally correct if it produces more happiness of all affected by it than any other alternative and wrong if it does not. Utilitarianism provides a clear method for deciding on a course of action that disregards personal confusion. Bentham's aim was to achieve a specific scientific formula to calculate how much pleasure and pain is produced from each proposed action. From this Bentham proposed the hedonic calculus which had seven criteria; intensity, duration, purity, extent, certainty, fecundity and remoteness. ...read more.

The majority of people would not have to suffer for the sake of a minority. However, does this justify causing pain to the minority of people? In theory, utilitarianism seems to be a good theory that is used in modern civilisations today in order to decide what would be the best course of action for the majority of people. Laws would be created for the people by the people and there is little chance that one person would hold all the power. However, when further analysed there are significant limitations. In order to make an action moral from a utilitarian point of view you must first predict what will happen as a result of the action that you take. This is an important weakness of the theory of utilitarianism as sometimes it can be near impossible to predict what will happen. ...read more.

Who would you pick out of the two people? This would prove a problem for a utilitarian because they have to consider how many people would be made happy by saving either their mum or the scientist. If they were to save the scientist then millions of people could be cured of cancer and this is generally what a utilitarian would choose but then you have let your own mother die. You have a special responsibility to your mum as she is your family and she brought you up and you both love each other. So this is a dilemma that some utilitarians may have to face. John Stuart Mill improved Bentham's utilitarian theory. He believed that there were different levels of pleasures that humans enjoy and pushed the emphasis from the quantity of pleasure to the quality. The higher pleasures of the mind are preferred to the lower pleasures of the body. As Mill states; 'It is better to be Socrates dissatisfied than a fool satisfied.' ...read more.