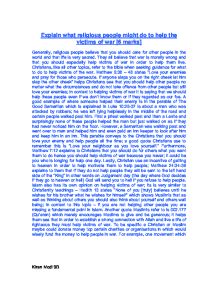 Explain what religious people might do to help the victims of war [6 marks] Generally, religious people believe that you should care for other people in the world and that life is very sacred. They all believe that war is morally wrong and that you should especially help victims of war in order to help them live. Christians, like all other topics, refer to the bible when seeking guidance for what to do to help victims of the war. Matthew 5:38 - 48 states "Love your enemies and pray for those who persecute. If anyone slaps you on the right cheek let him slap the other cheek" helps Christians see that you should help other people no matter what the circumstances and do not take offence from other people but still love your enemies; in context to helping victims of war it is saying that we should help these people even if we don't know them or if they regarded as our foe. A good example of where someone helped their enemy is in the parable of The Good Samaritan which is explained in ...read more.

them that if they do not help people they will be sent to the left hand side of the "King" in other words on Judgement day (the day where God decides if they go to heaven or hell) God will send you to hell if you refuse to help people. Islam also has its own opinion on helping victims of war; its is very similar to Christianity teachings - Hadith 13 states "None of you [truly] believes until he wishes for his brother what he wishes for himself" which shows Muslim's that as well as thinking about others you should also think about yourself and others well being; in context to this topic - if you are not helping other people you are missing a fundamental point in Islam. Another quote Muslim's refer to is 002.177 (Qu'aran) which merely encourages Muslims to give and be generous; it helps them see that in order to establish a strong connection with Allah and live a life of righteous they must help victims of war. ...read more.

One organisation within the movement is The International Committee of the Red Cross (ICRC), which has won the Nobel Peace Price on three occasions (in 1917, 1944 and 1963) and consists of 25 committee members whose aim are to protect the life of those affected by conflict. Another organisation of the movement is 'The International Federation of Red Cross (IFRS) and it was founded in 1919 and is currently based in Geneva, Switzerland. The organisation has a similar role to the ICRC and jointly won the Nobel peace price with the ICRC in 1963. Last but not least is the Nation Red Cross and Red Crescent Societies which are scattered around the world and is regarded to the ICRC as a full member of the Federation. Depending on where the entity is based the organisation will help that specific country and provides emergency medical services to the national health care system and abides to the basic principles of The International Red Cross and Red Crescent Movement. ?? ?? ?? ?? Kiran Modi 9B ...read more.