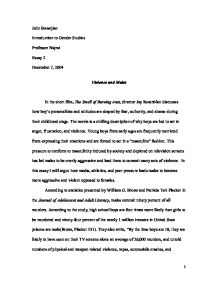 John Bozarjian Introduction to Gender Studies Professor Najmi Essay 2 December 7, 2004 Violence and Males In the short film, The Smell of Burning Ants, director Jay Rosenblatt discusses how boy's personalities and attitudes are shaped by fear, authority, and shame during their childhood stage. The movie is a chilling description of why boys are led to act in anger, frustration, and violence. Young boys from early ages are frequently restricted from expressing their emotions and are forced to act in a "masculine" fashion. This pressure to conform to masculinity induced by society and depicted on television screens has led males to be overly-aggressive and lead them to commit many acts of violence. In this essay I will argue how media, athletics, and peer pressure leads males to become more aggressive and violent opposed to females. According to statistics presented by William G. Brozo and Patricia Teri Placker in the Journal of Adolescent and Adult Literacy, males commit ninety percent of all murders. According to the study, high school boys are four times more likely than girls to be murdered and ninety-four percent of the nearly 1 million inmates in United State prisons are male(Brozo, Placker 531). They also write, "By the time boys are 18, they are likely to have seen on their TV screens alone an average of 26,000 murders, and untold numbers of ...read more.

The impulse to act aggressive and commit violence can be seen at the very early ages of a boy, especially in athletics. Growing up, boys are urged to participate in sports such as football, boxing, karate and ice hockey. All of these sports contain the element of physical contact that is a huge source of violence. Girls on the other hand are urged by society to partake in activities such as ballet, dancing, cooking and other non-contact activities. The bigger and stronger boys tend to be superior to smaller and weaker boys in sports. The boys who are more aggressive will often beat out an opponent to a ball or knock them to the canvas. A Research Quarterly for Exercise and Sport article writes, "Aggressive behavior in professional ice hockey has seen a dramatic increase since 1975, and many players and coaches consider such behavior an important strategy for winning" (Aimar, Sheldon 304). In hockey, fist fights are often allowed and are not broken up by referees and this violence is glorified and encouraged especially by the crowd. Violence and intimidation are seen as vital components to help win games and generates rewards and profits for players, coached and owners of athletic teams. The violent behavior performed by professional athletes is often imitated by players at amateur and scholastic sports (Shields 503). ...read more.

In order to be seen by the other workers as tough and masculine he had to once and awhile fight one of the patrons. In order to become one of the better bouncers, he began to take steroids. Steroids cause enormous increase of testosterone in a person's body which leads them to be moody and very aggressive. The combined pressure to be tough on the job and use of steroids caused this man to be arrested and now facing serious charges. It is not just the profession of a bouncer who is pressured to act tough, but males who work in the construction business and in security, often must appear and act strong to gain acceptance. It must be noted that even though statistics show boys commit more acts of violence, girls can also be influenced by the same factors as well as others. Also, media, athletics and peer pressure are not the only areas that influence males to become violence. We could also attribute influences such as family life and alcohol. In the past decade, violence committed by males has become an increasingly serious problem for our society. The over-aggression can be attributed to many severe crimes such as murder, rape and domestic abuse. The combination of violence in the media, on the playing fields as well as in everyday work and school has led boys to become very aggressive and commit acts of violence. ?? ?? ?? ?? 1 ...read more.