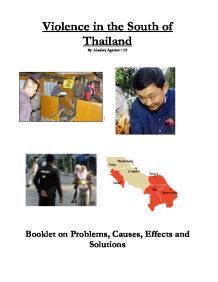 Violence in the South of Thailand

Violence in the South of Thailand By: Akashay Agarwal 11D Booklet on Problems, Causes, Effects and Solutions Contents Pages 1. Location 3 2. History 3 3. Problem 3 4. Causes/Reasons 4 5. Effects 4 6. Solutions 4 7. Opinion 5 8. Bibliography 5 Location The Violence in the South of Thailand has been reported in four provinces that are located at the extreme South Tip of Thailand, bordering the neighbouring country Malaysia. The names of these provinces are Yala, Pattani, Narathiwat and Satun. These are the provinces where the majorities are Muslims and where civil unrest has erupted once again since January 2004, including attacks on civilians and Army Camps. History Violence in Southern of Thailand has been a long problem, stretching over 500 years. Thailand is a Buddhist Nation with over 90% of the population being Buddhist. The next majorities are 4% Muslims that live mostly in the Southern Thailand provinces of Yala, Pattani and Narathiwat. Most of these Muslims are of Malyan origin and always wanted a Country of their own, which they wanted to call, "Greater Pattani". Since then, Muslim separatists have been fighting with security forces and have caused loss to life and property. For a brief period, violence had subsided and there was peace around. ...read more.

They want to use force to break and finish of those involved in the mastermind of the January attacks. On the other side, the locals are upset of the government's role and are ready to intensify their attacks in order to keep their identity, which they say the Thai Govt. is trying to undermine. Effects The Violence in the South of Thailand can have very deadly effects on Thailand and its Economy. According to analysts, the violence in South has been intensifying due to needs not met of the Muslim Separatists. With this increasing violence, there will be more conflicts between the fighters and the army people. This will lead to more deaths in the South and if needed, the extremists can plant and blow more places up, risking more deaths and great loss of property. If not stopped, the violence in the South can get worse. More raids on Army camps, more violence can be spread around the province and maybe to other provinces. Additionally, it could tarnish the country's image and the political group in power of their lack of thought and control over the region. Countries in Europe and America are calling their people to leave the South Area. ...read more.

* To solve the problem in a peaceful way and catch the bandits, drug dealers behind the violence. * Develop the Southern Provinces of Thailand; Encourage the Muslims to be friends These solutions will definitely help in the subsiding of the violence in Southern Thailand. Opinion Living in Bangkok, I have loved the sky rise buildings, the modern technology, the people and my school (even though hating the pollution and traffic). I am thoroughly upset at the violence and death that is occurring in the South of Thailand. A similar situation is in Jammu and Kashmir in India, so I have experience and know how it feels like. I personally believe that the Thai Government should take peaceful steps, including negotiations in order to solve the problem in South of Thailand. Though, very much stronger, the resistance shown by the Southern is strong and a lot will be lost if it goes on. Whichever side will win, the loss will be to the nation and it will tarnish the nation. Instead of violence, peaceful way will not only increase the percentage of coming up with a solution, but much less loss of property and life. This way the economy of Thailand will also be preserved, the tourists not scared of the violence and coming to Thailand to enjoy their holidays. Keep Thailand a safe and secure country. ...read more.