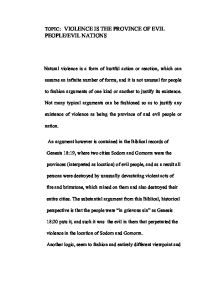 Violence Is The Province Of Evil People/evil Nations

TOPIC: VIOLENCE IS THE PROVINCE OF EVIL PEOPLE/EVIL NATIONS Natural violence is a form of hurtful action or reaction, which can assume an infinite number of forms, and it is not unusual for people to fashion arguments of one kind or another to justify its existence. Not many typical arguments can be fashioned so as to justify any existence of violence as being the province of and evil people or nation. An argument however is contained in the Biblical records of Genesis 18:19, where two cities Sodom and Gomorra were the provinces (interpreted as location) of evil people, and as a result all persons were destroyed by unusually devastating violent acts of fire and brimstone, which rained on them and also destroyed their entire cities. The substantial argument from this Biblical, historical perspective is that the people were "in grievous sin" as Genesis 18:20 puts it, and such it was the evil in them that perpetrated the violence in the location of Sodom and Gomorra. Another logic, seem to fashion and entirely different viewpoint and argument that the devastation, emanated from natural causes since the both cities where evidently located in a shallow rift valley on the southern side of the dead sea where deposit of sulpur and asphalt (bitumen pits ) ...read more.

Fire fighters could not have battled the flames effectively because the city's water- mains were damaged. The destruction by the earthquake was then to be compounded by the dynamiting of entire blocks of buildings throughout the city, as a means of control of the fires. At least thirty thousand persons died, almost two hundred and fifty thousand lost their homes and most of the city lay in ruins. Property damage exceeded five hundred million dollars. There should have been no doubt, that the evil activities of the people of San Francisco precipitated the City destruction's, particularly when the spiritual principles and consequences of Sodom and Gomorrah are paralled.. Not withstanding this pragmatic view, an entirely different perspective, possibly one that is Seismographic, can be fashioned as well. From this perspective the Theory of Plate Tectonics describes a situation where huge plates or layers of rocks situated tens and hundreds of miles under the earth's crust are subject to shifting and sliding horizontally against each other". The shifts and slides are said to create areas called transform- faults or boundaries which are generally the root causes of devastating earthquakes. ...read more.

The Holy Bible describes it as 'the absence of good', 'the corruption of what is good', 'sinful passions' or 'anything that is not faith'. Evil is understood in many doctrines as the manifestation\s of a spirit entity called the Devil, who ministers to people as a counterfeit or a corruption of the Truth. Generally, it presents itself in the form of crafty and sometimes diabolic suggestions, which ultimately leads to man's withholding of a proper response to the Creator's Majesty and Grace. Instead, man pays homage to the adversary, the Devil, and/or to his own ambitions and achievements. In contrast, a relatively different argument in the concept of evil lies in Theodicy, which, as a matter of speaking, has to do with "the vindication of the justice of God in establishing a world in which evil exists". This excuses, and glorifies malevolence as an explanation of the evil acts to which men in society are but simple prey. One may reasonably conclude therefore, that man's miseries are ineluctably the product of his nature. The root of all evil is therefore man, and so he himself must be seen as the province of any specific evil. ...read more.