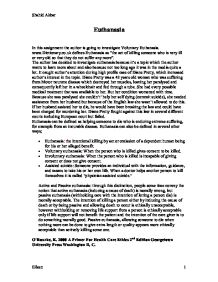 Euthanasia In this assignment the author is going to investigate Voluntary Euthanasia. www.Dictionary.co.uk defines Euthanasia as "the act of killing someone who is very ill or very old so that they do not suffer any more". The author has decided to investigate euthanasia because it's a topic which the author wants to learn more about and also because not too long ago it was in the media quite a lot. It caught author's attention during high profile case of Diane Pretty, which increased author's interest in the topic. Diane Pretty was a 43 years old woman who was suffering from Motor neurone disease which destroyed her muscles, leaving her paralysed and consequently left her in a wheelchair and fed through a tube. She had every possible medical treatment that was available to her. But her condition worsened with time. Because she was paralysed she couldn't' help her self dying (commit suicide), she needed assistance from her husband but because of the English law she wasn't allowed to do this. If her husband assisted her to die, he would have been breaking the law and could have been charged for murdering her. Diane Pretty fought against this law in several different courts including European court but failed. ...read more.

According to the view of consequentialists, they feel that actively taking a life of someone who is in pain is more humane and moral than letting someone die slowly. The author believes Autonomy is important, but should have its limits. The author believes a person should not be allowed to decide when they want to end their life this is also the view of people who believe in sanctity of life. According to sanctity of life point of view life is sacred and should be ended in natural way and no one should end it regardless of how much pain individual is suffering. According to sanctity of life argument poor existence is better than none. Most people whom believe or agree with this think its wrong to kill. This is reflected in laws all over the world where killing is prohibited. However others believe that life is only sacred where a person has a desire to live or have a certain quality of life. However this raises ethical issues such as is it right to end someone's life because we don't believe the life they are living lacks quality, how can we judge what a quality of life is. Quality of life definitions differ between each individuals, what one may see as quality the other person may not see it as quality. ...read more.