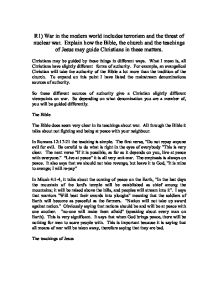 War in the modern world includes terrorism and the threat of nuclear war. Explain how the Bible, the church and the teachings of Jesus may guide Christians in these matters.

R1) War in the modern world includes terrorism and the threat of nuclear war. Explain how the Bible, the church and the teachings of Jesus may guide Christians in these matters. Christians may be guided by these things in different ways. What I mean is, all Christians have slightly different forms of authority. For example, an evangelical Christian will take the authority of the Bible a lot more than the tradition of the church. To expand on this point I have listed the mainstream denominations sources of authority. So these different sources of authority give a Christian slightly different viewpoints on war. So depending on what denomination you are a member of, you will be guided differently. The Bible The Bible does seem very clear in its teachings about war. All through the Bible it talks about not fighting and being at peace with your neighbour. In Romans 12:17-21 the teaching is simple. The first verse, "Do not repay anyone evil for evil. Be careful to do what is right in the eyes of everybody "This is very clear. The next verse "If it is possible, as far as it depends on you, live at peace with everyone." "Live at peace" it is all very anti-war. The emphasis is always on peace. It also says that we should not take revenge, but leave it to God, "It is mine to avenge; I will re-pay" In Micah 4:1-4, it talks about the coming of peace on the Earth, "In the last days the mountain of the lord's temple will be established as chief among the mountains; it will be raised above the hills, and peoples will stream into it". ...read more.

"Love your enemies and pray for those who persecute you...in order that you may be sons of you Father in heaven." Matthew 5:44-45 The word "patience" (patientia), is a word that during the early years of the church meant "The stead fast endurance to resist evil without doing violence to the evil doer. The firm and enduring resistance to evil and violent pressures of injustice and prejudice." Pacifists would say that this old meaning of the word patience has been forgotten and should be used as such rather than it being used as a liberal term with the definition "Waiting without complaint" "Blessed are the peacemakers for they will inherit the kingdom of God" Matthew 5:3 "But I say to you...love your enemies and pray for those that persecute you...in order that you may be the children of your father who is n heaven" Matthew 5:44-45 Christian Pacifists would reject all wars on the grounds that war is the ultimate example of human depravity, and any attempt to justify it through the teachings of Jesus Christ is a perversion of scripture. When one accepts the offer of salvation through God, he begins the process of becoming a new creation. Old habits will die away and be replaced with a new view on life. Whereas we once used violence as a means to secure what was ours and what we believed we need for the future. The whole idea of "holiness" is to be different. The word "holy" comes from the word "hadios" which means "to be set apart for God". ...read more.

The Christian cannot share in any action, corporate or individual, that is a known contradiction to the requirement to discipleship. Christian non-pacifists support their position by using the Just War Theory. They would also say that they would defend themselves or their family if attacked. They would also say that they would support Christian Pacifism ideas and promote pacifism. St Thomas Aquinas developed the Just War Theory in the 13 century. In it he laid down 3 conditions for which it is right to engage in a war. In the 16 Century, a forth principal was added. These principles are: 1 - It must be on the authority of the sovereign-King or Queen, or the government 2 - The cause must be just 3 - The participant should have the right intentions. 4 - It should be waged by proper means. The Christians that use this idea would not say that war is a good thing, but if it has to happen then at least people should follow the Just War Theory. This theory is popular among young Christians who want to serve for their country in the army, but are afraid to do so by the teachings of their church. These Christians would say that Jesus was not absolutely clear about war and violence and that the bibles meaning can be interpreted to say that war is justified when using something similar to the just war theory. Most Christians would say that it is good to be a pacifist because it means that you are showing a good example to other non-Christians, and it will show them what it means to be a Christian in the modern world. ...read more.