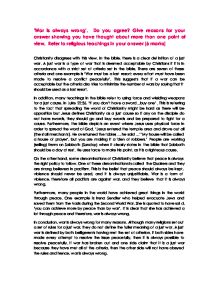 'War is always wrong'. Do you agree? Give reasons for your answer showing you have thought about more than one point of view. Refer to religious teachings in your answer [6 marks] Christianity disagrees with this view. In the bible, there is a clear definition of a just war. A just war is a type of war that is deemed acceptable by Christians if it is in accordance with a strict set of criteria set in the bible. There are seven of these criteria and one example is 'War must be a last resort; every effort must have been made to resolve a conflict peacefully'. This suggests that if a war can be acceptable but the criteria also tries to minimize the number of wars by saying that it should be used as a last resort. ...read more.

Furthermore, the bible depicts an event where Jesus uses physical force in order to spread the word of God. 'Jesus entered the temple area and drove out all [the stall merchants]. He overturned the tables ... he said ..." 'My house will be called a house of prayer', but you are making it a 'den of robbers.' People are working (selling) items on Sabbath (Sunday) when it clearly states in the bible that Sabbath should be a day of rest. He uses force to make his point, as it is a righteous cause. On the other hand, some denominations of Christianity believe that peace is always the right policy to follow. ...read more.

She is quoted to have said, 'you can achieve more by peace than by war'. It is clear that she has achieved a lot through peace and therefore, war is always wrong. In conclusion, war is always wrong for many reasons. Although many religions set out a set of rules for a just war, they do not define the fuller meaning of a just war. A just war is defined by both belligerents having met the set of criterion. If both sides have made every attempt to resolve the issue peacefully, then it is always possible to resolve peacefully. If war has broken out and one side claim that it is a just war because they have met all of the criteria, then the other side will not have obeyed the rules and hence, war is always wrong. ?? ?? ?? ?? ...read more.