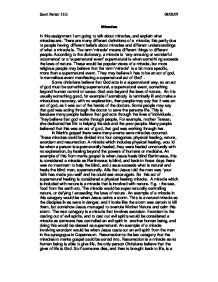 Miracles In this assignment I am going to talk about miracles, and explain what miracles are. There are many different definitions of a miracle; this partly due to people having different beliefs about miracles and different understandings of what a miracle is. The term 'miracle' means different things to different people. According to the dictionary, a miracle is 'any amazing or wonderful occurrence' or a 'supernatural event' supernatural is when something exceeds the laws of nature. These would be popular views of a miracle, but more religious people may believe that the term 'miracle' is a bit more specific, more than a supernatural event. They may believe it has to be an act of god, 'a marvellous event manifesting a supernatural act of God'. Some christians believe that God acts in a supernatural way, so an act of god must be something supernatural, a supernatural event, something beyond human control or cause. God acts beyond the laws of nature. An it is usually something good, for example if somebody is terminally ill and make a miraculous recovery, with no explanation, then people may say that it was an act of god, as it was out of the hands of the doctors. Some people may say that god was acting through the doctor to save the persons life. This is because many people believe that god acts through the lives of individuals. ...read more.

The liberal reader would believe that this story would have a message, and that is if everyone shares their wealth / goods, then everyone will benefit. Another example of a scripture that both readers would interpret differently would be the resurrection of Jesus Christ himself. A literal reader would in fact believe that Jesus rose from the dead in his bodily form. They would believe that if God has the power to create the universe, then Jesus would have the power to defy death itself. They also believe the body that returned was the exact same body that suffered the crucifixion; this is because Jesus still had wounds in his hands, feet and sides. A liberal reader may find it difficult to accept the fact that he has risen from death, so they believe that the people who witnessed Jesus' presence after his resurrection may not mean that Jesus was there with them in his bodily form, but that he was there with them spiritually and mentally. They believe that it is a message, that Jesus id not dead, he will always be with us spiritually. Two elements were essential in the occurrence of healing, and these were both faith and prayer. Faith means in the terms of the bible having complete trust in God, trusting him with your life, believing in him wit your mind body and soul, having complete confidence in him. ...read more.

People believe that amazing events with no natural explanation are supernatural events, miracles such as the weeping statues. This would be considered a miracle as it is a supernatural event; it has no logical, natural explanation. A statue of the Virgin Mary weeping tears of blood (which was tested by doctors and was found out to be blood) some Christians may believe that this would be an act of God. Other people believe that God works in a more natural way, through the lives of others. They see people who devote there life to good such as mother Teresa, or medical workers who devote there life's to saving others. Christians will also believe that God will give people courage, to put their own lives at risk for others, such as the New York fire fighters on September 11th. A miracle is more of a perception of an event; it is what you are going to let yourself believe. For example, if a child is severely injured in a car accident, and it is life threatening, were the chances of survival are slim. If the child makes it, the parents may well believe it is a miracle, and that it is an act of God and god has saved their child. But other may just see it as the doctors and their equipment have saved the child. So whether or not a miracle occurs today, is up to what people are prepared to let themselves believe. (Weeping Statue) ?? ?? ?? ?? Scott Parker 11G 08/02/07 ...read more.