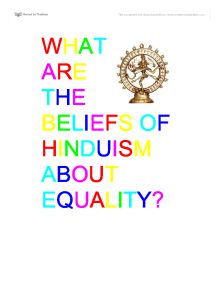 What are the Beliefs of Hinduism about equality?

WHAT ARE THE BELIEFS OF HINDUISM ABOUT EQUALITY? CONTENTS * Speciesism * Racism * Sexism * Prejudice/ * Discrimination * Forgiveness * Conclusion Speciesism In Hinduism the use of animals are for medical research. Hindus will not eat meat or meat products because of their respect for the animals. Hindus are opposed to any kind of cruelty to animals. Hindus believes that we should respect animals and not harm them. Hinduism says that we shouldn't kill animals but the majority of Hindus do not kill animals but eat meat such as chicken, beef, pork etc. Most Hindus are vegetarian, Butchery and related jobs are restricted to people of low caste. Cows are sacred to Hindus. Some Hindu temples keep sacred animals. Some Hindu gods have animal characteristics- Ganesh has the head of an elephant and Hanuman takes the form of a monkey. In India killing cows are banned. Racism Hinduism teaches that all people are equal. In the Bhagavad Gita it sayd that ; I look upon creatures equally' (Bhagavad Gita 9.29). ...read more.

Som hindus have very traditional attitudes. Some think that womens should be at home looking after the family, and that they should accept authority from their husband. Hinduism believes that only men can act as priests at religious festivals, onyl boys can recieve sacred threads from special ceremonies. Hindu women are expected to get married and possibley to have sons too. Men have a duty to protect the woman. Nowadays some hindu women choose how there life is gonna be. Hinduism teaches that marriage is an important duty for men and women. Arranged are common in Hinduism. Hindu weddings are chosen according to their horoscope. Prejudice /Discrimination Prejudice can be said by differences of religion, race, colour, sex, language, disability or age. Prejudice if not illegal but I believe that some attitude should be illegal. Hinduism believes that all human beings are born as equal. Believe that race, colour, sex, language, religion, disability or age should have rights. In Hinduism people are born into different Varna's. ...read more.

Forgiveness hindus believe that holding anger against someone else is not really necessary because that will get what he wants. Hindus believe that to hold anger and to look for revenge is damaging to the person who has feelings. It is better to not release your anger. Hindus believe that you should forgive people who have done a bad sin to you. Some hindus choose not to follow that part the bad sin that the person has effected might have been damaging you and you just can't forgive them for it. Conclusion In conclusion I say that Hinduism tells lots of things about equality and how religious some people are and what god will show and tell in temples, Hindu texts how life, jobs, social life is going to be. It tells how religious and strict Hinduism is and that Hindus should respect that and follow that on. Hinduism shows equality. Hinduism teached that all people are equal in the spiritual realm. The plants, other species, humans are all part of the ever changing stream of life. ?? ?? ?? ?? ...read more.