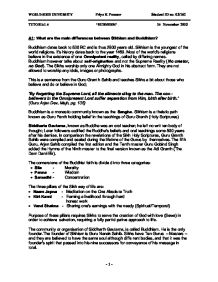 What are the main differences between Sikhism and Buddhism?

TUTORIAL 6 'BUDDHISM' 26 November 2003 A1: What are the main differences between Sikhism and Buddhism? Buddhism dates back to 530 BC and is thus 2500 years old. Sikhism is the youngest of the world religions. It's history dates back to the year 1469. Most of the world's religions believe in the existence of one Omnipotent reality, called by differing names. Buddhism however talks about self-origination and not the Supreme Reality (No creator, no God). The Sikhs worship only one Almighty God in his abstract form. They are not allowed to worship any idols, images or photographs. This is a sentence from the Guru Granth Sahib and teaches Sikhs a bit about those who believe and do or believe in God; 'By forgetting the Supreme Lord, all the ailments cling to the man. The non-believers in the Omnipresent Lord suffer separation from Him, birth after birth.' (Guru Arjan Dev, Majh, pg. 135) Buddhism is a monastic community known as the Sangha. Sikhism is a theistic path known as Guru Panth holding belief in the teachings of Guru Granth (Holy Scriptures) Siddharta Gautama, known as Buddha was an oral teacher; he left no written body of thought; Later followers codified the Buddha's beliefs and oral teachings some 500 years after his demise. In comparison the revelations of the Sikh Holy Scriptures, Guru Granth Sahib were compiled and sealed during the lifetime of the Gurus by themselves. The fifth Guru, Arjan Sahib compiled the first edition and the Tenth master Guru Gobind Singh added the Hymns of the Ninth master to the final version known as the Adi Granth (The Dam Dami Bir). The cornerstone of the Buddhist faith is divided into three categories: * Sila - Morality * Panna - Wisdom * Samadhi - Concentration The three pillars of the Sikh way of life are: * Naam Japna - Meditation on the One Absolute Truth * Kirt Karni - Earning a livelihood through hard honest work * Vand Shakna - Sharing one's earnings with the needy (Spiritual/Temporal) ...read more.

The only hope for sinful people lies in the fact that God is merciful and will grant the true seeker His Grace. In Buddhism, Buddha preached existence as suffering - dukkha - in Sikhism, Guru Nanak described dukkha as separateness of Self from Higher Self, through karmic bondage.Both talk of laying down of one's ego as ready to lay down his head. As long as there is an 'Iam' or 'I am the judge', you cannot be the disciple, servant; you cannot hear the words of your teacher. Overall the Buddhist thinking is different because of the idea of reality.Buddhists believe that: * Everything is impermanent and transitory - Annica * Life is marked with suffering i.e evil and dis-eased quality of life -Dukkha * There is no permanent soul or Self or Soul - Anatta * All things are subject to continual change and must eventually dissolve away. a) Buddhists believe in a circular samsara with an infinite beginning and an infinite end - The Wheel of Life. b) The mental nature together with what we now choose to put together produces potential situations c) We are masters of our own fate. -Although we have a certain freedom - CHOICE, because we are more or less compelled to do things. It is circumscribed by conditions. Buddhists strive for enlightenment and liberation from Dukkhas. They concern themselves with nature of reality, goal, knowledge. Sikhs strive for union with Supreme Reality, One God without parallel in His abstract form, Satguru, * By adoring the Holy Name (doing Naam recital) * By merging into Surati (in remembrance) quintessence of Guru Nanak's teaching (Naam Simran) Buddha refers to the word simriti- a state of complete consciousness. Each being has a stream of consciousness related to the Rupa - gross body matter. The stream of consciousness, citta santati is a continual motion or flow of waves from infinite past to the Infinite future until such time that Nirvana may be reached upon enlightenment. ...read more.

Discuss the role of Acharays in curbing the Buddhist movement in India. I may seem to be contradictory, but Buddhism practically disappeared from the land of its birth . This is perhaps a singular tragedy in history. The main factors that contributed to this tragedy were twofold: internal and external Division of the Buddhist monks in moral and spiritual attainments, division into opposing groups through a difference in belief and sectarian disputes among the supporters of Buddhism, the effects of the popular Mahayanist and the abuses of Tantrika doctrines and practices may be said to be responsible for the inner decay of Buddhism in India. Externally it has been observed historically that the decline in royal patronage, assimilation of Buddhism by Hinduism and the onslaught of Muslim invaders were chiefly responsible for the decline of Buddhism in India. Along with this the most powerful cause which weakened the hold of Buddhism on Indian population and which ultimately led to the obliteration of Buddhism as a living tradition in India was perhaps the Brahamanical - Acharaya's opposition against Buddhism. This opposition and propaganda was not confined to mere controversies over the doctrines but had its social and material counterparts, which manifested themselves in occurrences resultant in violent vandalism against Buddhist establishments, icons, scriptures and in the persecution of the Buddhists. This had a twofold benefit. On the one hand the Vedic Brahmanism transformed it into a puranic Brahmanism and preserved much of Buddhism in modern Hinduism. On the other hand they resulted in such a way that it became indistinguishable from Brahmanism and led to the practical disappearance of Buddhism as a distinct living tradition. Part of the propaganda policy was the admission by the Brahamanical authors that Buddha was an avatar of God. The result was that the Buddha became a Hindu God and Buddhism in India an integral part of Hinduism. It is only in the twentieth century that efforts are being made to revive Buddhism in India as a distinct faith. WORLD SIKH UNIVERSITY Priya K Panesar Student ID no: 03/162 - 1 - ...read more.