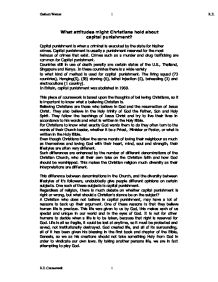 What attitudes might Christians hold about capital punishment? Capital punishment is when a criminal is executed by the state for his/her crimes. Capital punishment is usually a punishment reserved for the most heinous of crimes that exist. Crimes such as a murder and drug trafficking are common for Capital punishment. Countries still in use of death penalty are certain states of the U.S., Thailand, Singapore and Kenya. In these countries there is a wide variety to what kind of method is used for capital punishment. The firing squad (73 countries), Hanging(5), (58) stoning (6), lethal injection (5), beheading (3) and electrocutions (1 country). In Britain, capital punishment was abolished in 1969. This piece of coursework is based upon the thoughts of believing Christians, so it is important to know what a believing Christian is. Believing Christians are those who believe in God and the resurrection of Jesus Christ. They also believe in the Holy trinity of God the Father, Son and Holy Spirit. They follow the teachings of Jesus Christ and try to live their lives in accordance to his words and what is written in the Holy Bible. For Christians to know what exactly God wants them to do they often turn to the words of their Church leader, whether it be a Priest, Minister or Pastor, or what is written in the Holy Bible. ...read more.

This takes away the element of revenge which people feel when a capital crime is committed against someone close to them. Revenge is a catalyst for capital punishment which can give people a sense of satisfaction. This should not be true because as humans we should not take pleasure in the death of another of God's people, as this is morally and religiously wrong. Our Christian faith should not be compromised in a way that we do not follow the words and actions of the Lord, because our judgement is being clouded by emotions like jealously and anger. If we were to execute everyone who had committed a crime such as murder, in revenge or in vindication of the law, than where would the forgiveness and reformation aspect of our beliefs come into the equation? Maybe in hindsight we would know what should be done, but then that would not bring the executed back to life. Once a person is killed, their life is over, and we as Christians must try to realise what that life meant to us, whether it be the victims or the criminals. Obviously there are going to be Christians who share a different view on the issue, and they also have points to make to back up their views. ...read more.

On earth it is our job to protect those in danger and discipline those who do not obey rules. God will judge people in death so it is us who have to judge people when they are still alive, and capable of committing crimes. So with these arguments, which is the right view for Christians to have? Should we accept the views of God in the Old Testament were he calls for an eye for an eye, or do you follow Jesus' view where he explains in Matthew 5:38-42 that we should not take revenge. Is it true that God because gave us life, it is not for us to take it, regardless of situation, or should we be taking the views of the Catholic Church, who seems to condone it? Are we following what God wants, how can we be certain? What I personally feel is that capital punishment should be used in only the most extreme of cases, the same as the Catholic catechism. This is not because I am a Catholic, but it is because I believe that capital punishment is not to be used lightly. By this I mean that the death penalty should be used to punish the criminals who are recidivist murderers, drug dealers or sex offenders. I am not sure that this is what God wants me to think but this is the way that I feel. ?? ?? ?? ?? Graham Warner R.E. Coursework R.E. Coursework Mrs Bignall ...read more.