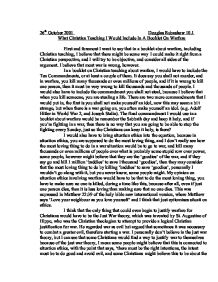 What Christian Teaching I Would Include In A Booklet On Warfare?

26th October 2001 Douglas Rubashow 10.1 What Christian Teaching I Would Include In A Booklet On Warfare First and foremost I want to say that in a booklet about warfare, including Christian teaching, I believe that there might be some way I could make it right from a Christian perspective, and I will try to be objective, and consider all sides of the argument. I believe that most war is wrong, however. In a booklet on Christian teaching about warfare, I would have to include the Ten Commandments, or at least a couple of them. It does say you shall not murder, and in warfare, you kill many thousands or even millions of people, and if it is wrong to kill one person, then it must be very wrong to kill thousands and thousands of people. I would also have to include the commandment you shall not steal, because I believe that when you kill someone, you are stealing a life. There are two more commandments that I would put in, the first is you shall not make yourself an idol, now this may seem a bit strange, but when there is a war going on, you often make yourself an idol. ...read more.

I think that the only thing that could even begin to justify warfare for Christians would have to be the Just War theory, which was invented by St. Augustine of Hippo, who was the Christian theologian to attempt to provide a logical Christian justification for war. He regarded war as evil but argued that sometimes it was necessary to combat a greater evil, therefore starting a war. I personally don't believe in the just war theory, but I can see that some Christians would find a way to justify war to themselves because of the just war theory, I mean some people might believe that this is connected to situation ethics, with the point that says, 'there must be the right intentions, the intent must be to do good and avoid evil, and some Christians might believe this to be about the most loving thing to do. Christians might go by the seven main points of the just war theory, if it was completely necessary to go to war, however I think their religion would compel them not to go to war unless it was completely necessary. ...read more.

Jesus, in Matthew 5:9. 'Peace is what I leave with you; it is my own peace that I give you.' Jesus, in John 14:27. 'It was late that Sunday evening, (the night Jesus rose from the dead) and the disciples were gathered behind locked doors, because they were afraid of the Jewish authorities. Then Jesus came and stood among them ' Peace be with you,' he said. After saying this, he showed them his hands and his side. The disciples were filled with joy at seeing the Lord. Jesus said to them again, 'Peace be with you. As the father sent me, so I send you...' John 20:19-21. 'And God's peace, which is far beyond human understanding, will keep your hearts and minds safe in union with Christ Jesus.' Paul, in Philippians 4:7. 'May God, our source of peace, be with all of you.' Paul, in Romans 15:33. In conclusion, I think that the just war theory is the only piece of information I've given you that begin to justify warfare for Christians, and all in all, I don't think many Christians would think about war, unless forced to do so. By Douglas Rubashow 10 S ...read more.