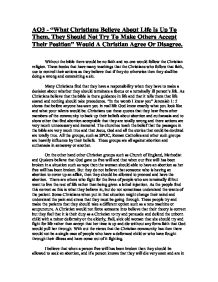 What Christians Believe About Life Is Up To Them. They Should Not Try To Make Others Accept Their Position Would A Christian Agree Or Disagree.

AO3 - “What Christians Believe About Life Is Up To Them. They Should Not Try To Make Others Accept Their Position” Would A Christian Agree Or Disagree.

Without the bible there would be no faith and no-one would follow the Christian religion. These books that have many teachings that the Christians who follow that faith, use to control their actions as they believe that if they do otherwise then they shall be doing a wrong and committing a sin.

Many Christians find that they have a responsibility when they have to make a decision about whether they should terminate a foetus or a terminally ill person’s life. As Christians believe that the bible is there guidance in life and that it tells them that life scared and nothing should take precedence. “In the womb I knew you” Jeremiah 1: 5 shows that before anyone has seen you in real life God knew exactly what you look like and what your talents would be. Christians use these quotes that they hear from other members of the community to back up their beliefs about abortion and euthanasia and to show other that find abortion acceptable that they are totally wrong and there actions are very much unnecessary and immoral. The churches teach the belief that the passages in the bible are very much true and that Jesus, God and all the stories that could be doubted are totally true. All the groups, such as SPUC, Roman Catholics and other such groups are heavily influence by their beliefs.  These groups are all against abortion and euthanasia in someway or another.

On the other hand other Christian groups such as Church of England, Methodist and Quakers believe that God gave us free will and that when our free will has been broken in a situation such as rape then the woman should able to have an abortion as her free will has been broken. But they do not believe that someone who is having an abortion to cover up an affair, then they should be allowed to proceed and have the abortion.  There are others who fight for the lives of people who are terminally ill but want to live the rest of life rather than being given a lethal injection. As the people find this correct as this is what they believe in, but do not sometimes understand the wants of the patient. Some Christians when put in that situation might change their mind and understand the pain and stress that they must be going through. These people try and make the patients that they should take a different option such as a tens machine or acupuncture. A Christian would not force someone into believe that their theory is correct but they feel that it is their duty as a Christian to try and persuade and defend the unborn child with a minor deformity or the elderly, frail, sick old woman that she should try and fight for life rather than accept that her time is up and die without any form faith that God would pull her through. With out the views that the Christian community has then there would not be a single case of people who have a deformed child or who have fought through their illness and have come out of it fighting.