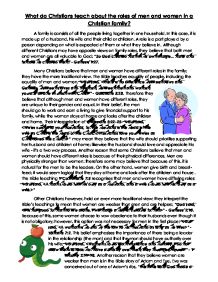 What do Christians teach about the roles of men and women in a Christian family?

What do Christians teach about the roles of men and women in a Christian family? A family is consists of all the people living together in one household. In this case, it is made up of a husband, his wife and their child or children. A role is a part played by a person depending on what is expected of them or what they believe in. Although different Christians may have opposite views on family roles, they believe that both men and women are all valuable to God; "So God created man in his own image... male and female he created them"- Genesis 1:27. Many Christians believe that men and women have different roles in the family; they have the more traditional view. The Bible teaches equality of people, including the equality of men and women, "Paul said, <There is no difference between Jews and Gentiles, between slaves and freemen, between men and women, you are all one in union with Christ>"- Galatians 3:28. Therefore they believe that although men and women have different roles, they are unique to their gender and equal. In their belief, the man should go to work and earn a living to give financial support to his family, while the woman stays at home and looks after the children and home. Their interpretation of Ephesians 5:22-25- "Paul said, <Wives submit to your husbands, for the husband is the head of the wife as Christ is the head of the Church. ...read more.

Also, Eve gave in to temptation of the forbidden fruit faster than Adam did. Contrastingly, some Christians believe that men and women can have the same roles if they wish; a completely different view to the traditional one. They may believe that the men can partake in the housework and caring for the children too, and the women can go out to work and earn. This belief builds on the teaching that men and women were created equal, and extends this to them having equal opportunities in work and sharing of childcare: "Jesus tells Martha that there is more to the role of a woman than just doing housework"- Luke 10:42. Christians who believe this may think it is important not to compare men and women's differences in a way that may suggest that men are superior and in charge. A Quote by St. Ambrose supports this view: "You are not her master but her husband; she was not given to you to be your slave, but your wife... Return her attentiveness to you and be grateful to her for her love." These Christians have a more balanced approach to men and women's roles: a woman having a career (if she chooses to have one) is just as important as her work at home (if she doesn't choose a career); also, men should be equally involved in family life and care as women: "But if anyone does not take ...read more.

The church, once viewed as socially conservative, has since moved rapidly to elect more women to this leadership position every year since the process began. By July 2003, twenty-four of the church's 130 deacons were women... a change that other twenty-first-century Baptist churches are encountering and must decide whether to adopt, reject, or avoid." According to further research, the Free Methodist Church accepts women as equal to men and both are allowed to be ordained: "The General Conference of 1974 passed a resolution "giving women equal status with men in the ministry of the church" (General Conference Minutes, p. 388)."- http://www.smcfmc.org/women%20in%20ministry.html This suggests that Methodists believe that the roles of men and women in a family can be the same. In conclusion, the roles of men and women in a Christian family depend entirely on their own thoughts, views, upbringing and what they as individuals believe. The Bible's teachings are often contradictory to one another, as they are with family roles; this means the roles the husband and wife in the Christian family take depend on their interpretation of the Bible: "Paul said, <All scripture is God breathed and is useful for teaching, rebuking, correcting and training in righteousness, so that the man of God may be thoroughly equipped for every good work>"- 2 Timothy 3:16. Their views, however, may also be influenced by the Christian denomination that they belong to. Njeri Chege ...read more.