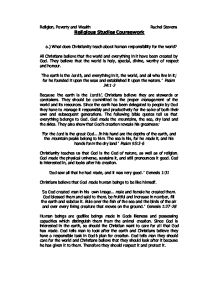 What does Christianity teach about human responsibility for the world?

Religion, Poverty and Wealth Rachel Stevens Religious Studies Coursework a.) What does Christianity teach about human responsibility for the world? All Christians believe that the world and everything in it have been created by God. They believe that the world is holy, special, divine, worthy of respect and honour. 'The earth is the Lord's, and everything in it, the world, and all who live in it; for he founded it upon the seas and established it upon the waters.' Psalm 24:1-2 Because 'the earth is the Lord's', Christians believe they are stewards or caretakers. They should be committed to the proper management of the world and its resources. Since the earth has been delegated to people by God they have to manage it responsibly and productively for the sake of both their own and subsequent generations. The following bible quotes tell us that everything belongs to God. God made the mountains, the sea, dry land and the skies. They also show that God's creation reveals his greatness: 'For the Lord is the great God... In his hand are the depths of the earth, and the mountain peaks belong to him. The sea is his, for he made it, and his hands form the dry land' Psalm 95:3-6 Christianity teaches us that God is the God of nature, as well as of religion. God made the physical universe, sustains it, and still pronounces it good. God is interested in, and looks after his creation. 'God saw all that he had made, and it was very good.' Genesis 1:31 Christians believe that God made human beings to be like himself. 'So God created man in his own image... male and female he created them. God blessed them and said to them, be fruitful and increase in number, fill the earth and subdue it. Rule over the fish of the sea and the birds of the air and over every living creature that moves on the ground.' ...read more.

Some Christians also choose to organise car sharing, or to walk or cycle to work/church/etc. This is to reduce the number of cars on the road and the energy consumption and pollution that is a result from too much traffic. Some Christians even choose to join organisations that work to provoke conservation. Our responsibilities towards animals are another key area of concern today. There is much public debate about various practices such as vivisection, intensive farming, the shipping and slaughter of animals for food, the caging of wild animals and the use of animals for sport where the animals welfare is not respected, for example, dog fights and fox hunting. From looking at the Bible many Christians believe that God is asking them to look after animals. Psalm 104 tells Christians that God is concerned for animals by giving them life, food and water. According to Proverbs 12:10 'a righteous man cares for the needs of his animals.' Christians therefore feel that it is their responsibility to respect and care for the animals of this planet. There are many ways in which Christians can help prevent cruelty to animals. For example Christians can protest against all perceived cruelty to animals and campaign for their humane treatment in all circumstances. Some support organisations such as the RSPCA or the RSPCB. Poverty is another key area in which Christians feel they should have responsibility in. Poverty is not just a problem for the third world countries. In the United States in 1995 there were 36.4 million people living below the poverty line. In Britain in 1995 there were still 9.7 million people living on incomes at or below the level of supplementary benefit. There are almost 6 billion inhabitants on earth, a quarter of whom remain in severe poverty. In the developing world only 68% of the population have access to safe drinking water. Almost two billion people in the third world are without access to proper sanitation farcicalities that cause diseases which are responsible for more than 35% of the deaths of young children in Africa, Asia and South America. ...read more.

Many Christians believe that they should take action in helping these countries. Psalm 24:1 says "The earth is the Lord's and everything in it, the world and all who live in it." God has created us single people (human race) and placed us in a single habitat (planet earth). In other words all people are to share in its God giving riches. Christians see that all people have equal worth and each person should have equal opportunity to develop his or her God given potential for the common good. Millions of people are unable to develop their human potential which Christians see as being an offence to God who gave gifts to them to be used and developed, not wasted. Many Christians therefore support programmes which give people opportunities for education. Christians also believe in supporting fair trade deals to give the people a chance to earn decent wages. Christians believe that the present situation in the Third World is not God's fault (because he has provided plenty of resources in the earth and sea), nor is it the fault of the poor (because they were mostly born into it, although some government leaders are to blame for corruption), nor is it necessarily the fault of the developed world (although in the past some ancestors may have had a share in creating it). It is instead the responsibility of those who have plenty to share with the Third world so that they can overcome their poverty. Christians believe they have a duty to make sure the situation does not continue. The Universal Declaration of Human Rights states that, "Everyone has the right to a standard of living adequate for the health and well-being of him/herself and his/her family, including food, clothing, housing and medical care and necessary social service. Everyone has the right to education.' As we know 3rd World countries often do not have these basic rights. More needs to be done by the developed world to ensure a normal lifestyle for these communities. ...read more.