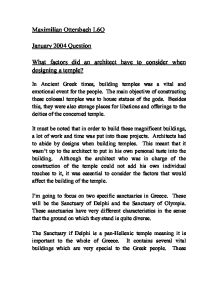 What factors did an architect have to consider when designing a temple?

Maximilian Ottersbach L6O January 2004 Question What factors did an architect have to consider when designing a temple? In Ancient Greek times, building temples was a vital and emotional event for the people. The main objective of constructing these colossal temples was to house statues of the gods. Besides this, they were also storage places for libations and offerings to the deities of the concerned temple. It must be noted that in order to build these magnificent buildings, a lot of work and time was put into these projects. Architects had to abide by designs when building temples. This meant that it wasn't up to the architect to put in his own personal taste into the building. Although the architect who was in charge of the construction of the temple could not add his own individual touches to it, it was essential to consider the factors that would affect the building of the temple. ...read more.

This meant that the dimensions of the buildings had to be examined carefully so that they wouldn't look 'ugly' when finished. By 'ugly', I mean having pieces of rock sticking out of any part of the temple which would be ruining the beauty of the temple itself. A second factor would be the transportation of the materials for the construction of the temple. Due to the extreme weight of the boulders of rock, it was decided to use limestone in the construction as it is a local rock and most importantly, it is much lighter in comparison to other types of rock. The fact that the Sanctuary of Delphi was located on a narrow shelf of land on the south side of Mt. Parnassos, high above the plain of Amphissa. ...read more.

The Sanctuary of Olympia is also a pan-Hellenic sanctuary. Its location is on the Western Peloponnese, in a fertile, well watered and wooden countryside, in the valley of the river Alpheios. In this sanctuary, there are fewer buildings than in the Sanctuary of Delphi. The construction of this sanctuary would have been more straight forward as it is flat therefore the mobility of the materials would have been way easier as there is less effort involved. However, one factor that the architect would have had t consider was the layout of the different buildings that were to be built in the sanctuary. The fact that there were to be two temples, one dedicated the Zeus and the other dedicated to Hera, would have been a point to think about as they were supposed to be rather large buildings so it was essential to have them built in an adequate location within the sanctuary of Olympia. ...read more.