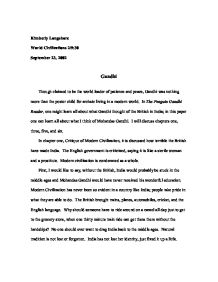 What I think of Mohandas Gandhi.

Kimberly Longshore World Civilizations 2/9:30 September 23, 2002 Gandhi Though claimed to be the world leader of patience and peace, Gandhi was nothing more than the poster child for archaic living in a modern world. In The Penguin Gandhi Reader, one might learn all about what Gandhi thought of the British in India; in this paper one can learn all about what I think of Mohandas Gandhi. I will discuss chapters one, three, five, and six. In chapter one, Critique of Modern Civilization, it is discussed how terrible the British have made India. The English government is criticized, saying it is like a sterile woman and a prostitute. Modern civilization is condemned as a whole. First, I would like to say, without the British, India would probably be stuck in the middle ages and Mohandas Gandhi would have never received his wonderful education. Modern Civilization has never been so evident in a country like India; people take pride in what they are able to do. ...read more.

Even though the British were actively pursuing the Indians, Gandhi stood firm on his beliefs that they should remain passive. None of this was because of weakness, but because they were stronger and more manly than the British. Sure, we've all heard what it takes for a real man to walk away, but lets be honest, Gandhi had to be out of his mind. He wanted to revolt by being nearly naked, wearing only home-spun cloth, and waiting on the British to kill them one by one. This, to me, is absolutely absurd. Why would anyone not want to actively participate in a battle being fought against them? No doubt, it is a spiritual struggle, but to just lay around half-naked all day watching while your brothers and sisters are being murdered seems more like passively being scared. In chapter five, Women and Sex, Gandhi gives a clear understanding on where he thinks women rank in this world. ...read more.

This is so true. The caste system and untouchability is relevant all over the world, not just India. Everyone in the world has experienced some sort of discrimination, and for Gandhi to explain this and decide it is unacceptable is truly remarkable. This book, as a whole was not very readable. Some of the chapters were good, they got my mind going. I guess I can only be thankful that such a reformed simple man like Gandhi can make such a difference. Now I don't feel like such a tiny piece of sand in this world. For the most part, Gandhi had some good ideas, nothing I believe would really work. I think that if Gandhi had actually thought his ideas out, he would have understood the concept of overpopulation. I suppose when I think of Gandhi, I think of the guy that wanted world peace, no one ever says how he hated the English government. I couldn't help but to imagine Abu from the Simpson's fighting the little English cop from Cookie Crisps (simple minded). I guess that's why I'm not considered a world leader. ?? ?? ?? ?? ...read more.