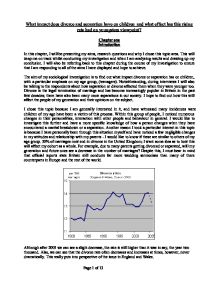 What impact does divorce and separation have on children and what effect has this rising rate had on youngsters viewpoint?

What impact does divorce and separation have on children and what effect has this rising rate had on youngsters viewpoint? Chapter one Introduction In this chapter, I will be presenting my aims, research questions and why I chose this topic area. This will keep me on track whilst conducting my investigation and when I am analysing results and drawing up my conclusion. I will also be referring back to this chapter during the course of my investigation to ensure that I am responding to all of the aims I have displayed and hope to achieve. The aim of my sociological investigation is to find out what impact divorce or separation has on children, with a particular emphasis on my age group, (teenagers). Notwithstanding, during interviews I will also be talking to the respondents about how separation or divorce affected them when they were younger too. Divorce is the legal termination of marriage and has become increasingly popular in Britain in the past few decades; there have also been many more separations in our society. I hope to find out how this will affect the people of my generation and their opinions on the subject. I chose this topic because I am generally interested in it, and have witnessed many incidences were children of my age have been a victim of this process. Within this group of people, I noticed numerous changes in their personalities, interaction with other people and behaviour in general. I would like to investigate this further and have a more specific knowledge of how a person changes when they have encountered a marital breakdown or a separation. Another reason I took a particular interest in this topic is because I have personally been through this situation myself and have noticed a few negligible changes in my attitudes and relationship with my parents - I would like to know if these are similar to others of my age group. ...read more.

But, it began to be acceptable when people no longer had to live in empty-shell marriages, it was extremely advantageous - however the reasons for divorce have changed, and people do seem not to give their relationships a chance, as my primary statistical data implies. Evidence hints it began in 1971 when the Divorce Reform Act was introduced and in 1988, when the waiting time was shortened. As the various laws came into force and it became easier, people began to see nothing wrong in terminating their marriage. If something is law, people cannot look down on others as much, in the eyes of the government and police, they have done nothing wrong and it is perfectly acceptable - if it wasn't, it wouldn't have been enforced. When a law is changed, attitudes are, and so came less social stigma and a dramatic rise in divorce. Also, could it be perhaps the fact people now have a longer life expectancy, meaning more time with the same partner. Could this just, in some cases, be through boredom? If so, I am sure many would agree that this is deplorable, however, not in the eyes of the law. Observation, 'Case Study two' For confidence reasons I will not be displaying this individuals location or name. This is a fifteen year old male, who experienced a rather disordered divorce, which is still currently causing many arguments with the teenager and his father. I revisited his behaviour before this legal termination of marriage and how it currently is. Although this is just one case, I could notice a few of these changes in myself and "case study one" meaning although people react to this stimulus in different ways, there are many overlaps. To present these findings, I decided to place them in a table. This way I could compare the changes easily. Characteristics before Characteristics after Against smoking and the abuse of alcohol Smokes regularly and also binge drinks. ...read more.

I did find that my generation have become far more vigilant where marriage is concerned, they seem to be sure that they will choose carefully and not rush into anything - I am convinced that this is directly the cause of the rising divorce rate. It does not, nonetheless, put them of the concept of marriage. Nevertheless, there is a clear link between experiencing a divorce/separation and not yearning for (at this age) to marry later in life. I trust it may just be the phobia. As for the first part of the question, "What impact does divorce or separation have on children...," there cannot be one unambiguous answer, although I did find an assortment of overlaps which included a better education or on the other hand a failing education. The individual will obviously become extraordinarily saddened, bringing a strain on their relationships, especially parents; and in some cases, the individual will be so full of hatred that they rebel against society and use the influence of drugs such as tobacco and alcohol to escape. They will often be mystified about their own feelings. Also, they may feel drawn to one parent's side or perhaps blame them, or worse, themselves. If a parent becomes dejected after a break-up the child will be under immense strain, especially if they come in contact with severe arguments between and or feel that its their responsibility to take care and look after them, causing problems with the relationship with another parent. These may be distinct arguments, however, I strongly believe that many people experiencing this would find common ground, as I can certainly see many of these things in myself, and I am sure many others will too, although as every case is unique, there will be a exceedingly high amount of variation and of course additions, the list is huge, and was impossible for me to locate every single affect a separation or divorce has on a child. ...read more.