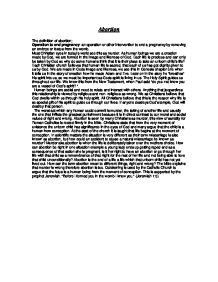 Abortion The definition of abortion; Operation to end pregnancy: an operation or other intervention to end a pregnancy by removing an embryo or foetus from the womb. Most Christian eyes in today's world see this as murder. As human beings we are a creation made by God, we are formed in the image and likeness of God. Each life is precious and can only be taken by God so why do some humans think that it is their place to take an unborn child's life? Each Christian church believes that human life is sacred, that each of us has got dignity given to us by God. We are made in Gods image and likeness, we see this in Genesis chapter one when it tells us in the story of creation how he made Adam and Eve. ...read more.

We as Christians believe that God dwells within us through his holy spirit. All Christians believe that this is the reason why life is so special gift of his spirit to guide us through our lives. If anyone destroys God's temple, God will destroy that person. The worst act which any human could commit is murder, the taking of another life and usually the one that inflicts the greatest punishment because it is in direct contrast to our moral and social values of right and wrong. Abortion is seen by many Christians as murder, this view of sanctity for Roman Catholics is rooted firmly in the bible. Christians state that from the very moment of existence the unborn child has significance in the eyes of God and many argue that the child is a human from conception. ...read more.

How can abortion be right in one situation example a young lady ends up getting raped and as a consequence of that action she is pregnant, is it her right to have an abortion or go through her life with that child as a remembrance of that night for the rest of her life and not being able to love that child unconditionally? Abortion is the end of a life a life which that unborn child has not yet lived out. How can the term abortion mean to different things, right and wrong? The bible explains that murder is wrong therefore abortion is too. Quickening is used by the Catholic Church to argue that the fetus is a human being from the moment of conception. This is supported by the prophet Jeremiah. "Before I formed you in the womb I knew you." (Jeremiah 1:5) ...read more.