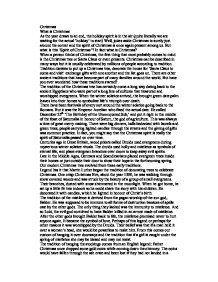 Christmas What is Christmas As the year draws to an end, the holiday spirit is in the air (quite literally we are waiting for the actual 'holiday' to start) Well, jokes aside Christmas is surely just around the corner and the spirit of Christmas is once again present among us. But what is this 'Spirit of Christmas'? In fact what is Christmas? When a person thinks of Christmas, the first thing that most probably comes to mind is the Christmas tree or Santa Claus or even presents. Christmas can be described in many ways but it is usually celebrated by millions of people according to tradition. Tradition dictates to put up a Christmas tree, decorate the house for 'Santa Claus to come and visit' exchange gifts with one another and the list goes on. There are other ancient traditions that have become part of many families around the world. But have you ever wondered how these traditions started? The tradition of the Christmas tree has certainly come a long way dating back to the ancient Egyptians who were part of a long line of cultures that treasured and worshipped evergreens. ...read more.

When he got home, he set up a little fir tree indoors so he could share the story with his children. He decorated it with candles, which he lighted in honour of Christ's birth. The tradition of the mistletoe is derived from the pagan worship of the sun god, Balder. He was supposed to be immune to all forms of destruction because of spells cast by the other gods. The only thing they lacked was the immunity to mistletoe. And so Loki, the evil god contrived to have Balder killed in an arrow made of mistletoe. After the other gods brought Balder back to life, the mistletoe promised never to hurt anyone again. It became the symbol of love. Perhaps of this legend or perhaps for other reasons it was worshipped by the Druids. Their belief was that if a man held it over a woman's head, she would be powerless to resist him. From this comes our custom of hanging it over doorways and the tradition that if a girl is caught under the spring of mistletoe she may be kissed and may not resist. ...read more.

It was not until relatively recent times that our present day Santa Claus developed as we know him. In 1822 an American minister named Clement C. Moore first described Santa (complete with fur trimmed suit and his reindeer powered sleigh) for his children in a poem called 'A Visit from St. Nicholas.' In 1823, at the bidding of friends, Moore published his poem calling it 'The Night before Christmas,' in the New York Sentinel. This well loved poem is the foundation of our present day Santa Claus. We must keep one thing in mind. All of the folk legend and practices have sufficiently taken Christ out of Christmas. Christmas is a time of celebration which is why we partake so many traditions that help create the wonderful atmosphere, but we should not forget the true purpose of Christmas. On December 25th the entire Christian world comes together putting aside petty quarrels and minor differences to commemorate the birth of Jesus. It is a joyous occasion when families and friends are gathered together exchanging presents and love. Be it with family or be it with friends, let us all have a truly MERRY CHRISTMAS and a HAPPY NEW YEAR. Edison John ...read more.