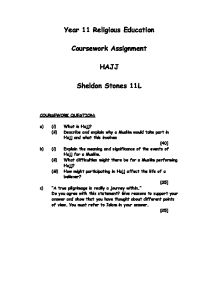 Hajj for a Muslim.

(ii)        What difficulties might there be for a Muslim performing Hajj?

(iii)        How might participating in Hajj affect the life of a believer?

Do you agree with this statement? Give reasons to support your answer and show that you have thought about different points of view. You must refer to Islam in your answer.

A (i)Hajj is the pilgrimage to Makkah, a Muslim-only city. Tourists aren’t welcome to Makkah; Hajj is for Muslims to get closer to God and isn’t meant to be a tourist attraction. It is the duty of every healthy and financially stable Muslim to complete Hajj once in their lifetime. It is a deeply spiritual journey for the millions of Muslims who complete Hajj every Muslim year, between 8 and 13 Dhul-Hijjah – the final month. Some Muslims may prefer to visit Makkah on a pilgrimage at another time in the year, but this is not considered as important as Hajj, and is called Umrah. Because so many Muslims want to experience Hajj for the first time, those who have done it before often do Umrah instead. Hajj is the fifth of the five pillars of Islam; the basis of the religion. It is meant for the sane and mature Muslim mind, and it is usually considered an honour to die during one’s Hajj, as it is widely believed burial in the city of Makkah will bring Muslims closer to their God, and is a good indication of their dedication to Islam.

A (ii)Hajj is widely considered essential in order to be a devout Muslim. It is one of the five pillars of Islam which are the biggest and main requirements of the religion. It is considered that Hajj is something of a ticket to heaven in the afterlife. The pilgrimage is to show ones self to Allah, and let him be the judge of character. With a good Hajj comes a peaceful afterlife and paradise. It is not just a physical practice, for true meaning a pilgrim must enter a whole new mindset and way of living, at least for the days of Hajj. This was of living is called Ihram, and is the first obligatory rite of Hajj. All men must wear two white unhemmed sheets so that all look alike, and wealth, age and status in general is not even considered. Whilst in Ihram, Muslims should not argue, swear, kill (even insects!) or participate in a sexual relationship even accompanied by husband or wife. Ihram creates an equilibrium and purity for Hajj. It unites every pilgrim and crates a pure mental canvas solely ready to think about nothing but God. The physical part of Hajj is all about recreating significant and very old events in Islam. First the pilgrims all run or walk quickly around the Ka’bah seven times, if close enough they will touch or kiss it. They then pray close to the Ka’bah, near Maqam Ibrahim. Next the Muslims rush between Marwah and Safa, two hills; seven times. The hills are linked now by a corridor for convenience and safety. After doing this, the pilgrims must make their way to the plain of Arafat, around 20km from Makkah. The pilgrims stand under the sun from midday until sunset praying to Allah, and asking for forgiveness. After this the pilgrims go to Muzdalifah to pray, collect stones and camp overnight. In the morning the pilgrims go to Mina to throw seven stones at three walls. After stoning the walls pilgrims make a sacrifice, often through companies nowadays. The sacrificed animal is the either frozen for future use or given to the poor Muslim community to eat. Men then shave their heads, and women cut off a lock of hair, usually a small amount; a few centimetres or a quarter. Muslims are then allowed to exit Ihram, changing into their normal clothes. They camp at Mina for three nights, and then return to Makkah to walk around the Ka'bah once again. They then drink water from the ZamZam well and their Hajj is complete. They are then a male Hajji, or a female Hajjah.

B (ii)There are many factors to prevent Muslims going to Hajj. It is said Allah excuses these factors. It is intention or niyyah that counts with the pilgrimage, and when there is something to prevent Muslims from attending it, they will be excused by Allah. The most common circumstance is poverty. There are around 1.4 billion Muslims in the world, and many live in poverty. Lots of Muslims will save up most of their life to do Hajj, and by the time they have enough money to go, they are of old age and aren’t physically able. In this case the Muslim can pay another existing Hajji to attend on their behalf, or donate their savings for Hajj to charity. If they do this they will be blessed as fully as if they had completed Hajj themselves. For those who can’t afford Hajj, they can donate their available savings for Hajj to charity. They will receive the full Hajj benefits also. If a Muslim passes away on their way to carry out Hajj, they will receive the full blessing also, they have died making a commitment to their religion, this shows devotion and niyyah if anything does!

Of course there are difficulties that could occur during Hajj. Because around two million pilgrims undergo Hajj every year, and are all dressed in near identical garments, it is very likely that groups will be separated for the period of Hajj. This may seem like a panicking time but Muslims in Ihram will be very sympathetic and helpful with each other in such circumstances, and probably take on new members into their travel groups. The overwhelming feeling of closeness to God on Hajj is enough to eliminate any feelings of worry for the meantime anyhow, so separation doesn’t cause much of a fright. Those unfortunate enough to die during Hajj are proud. It is a blessing to be buried in or near Makkah, close to God. Passing away making commitments to Islam is an honour, and a will is usually written before leaving for Hajj anyway. For those who fear the physical strain of Hajj, or are encouraged not to repeat the journey if they have already, Umrah is the lesser pilgrimage which can be carried out all year round. It involves the seven rotations of the Ka’bah (Tawaf), the Sa’i (Between Marwah and Safa) and a halq or taqsir; which is to cut the hair. Taqsir is shortening hair; halqis the complete head shave.

B (iii)Hajj creates equilibrium, and a sympathetic atmosphere among the pilgrims who share the highs and lows of the journey. For most, the journey strengthens and confirms their commitment to Islam. After Hajj, a Muslim is more likely to be more courteous to people in general, and more at ease with life. Once a good Hajj is completed, the afterlife should be more peaceful and happy. Some Muslims like the experience of the pilgrimage so much they move to a Muslim country if they do not live in one already, as they like the convenience and feeling of togetherness and empathy. Hajj strengthens the belief of many Muslims, and if they weren’t a very good Muslim before Hajj, they might feel the need to be more committed to their faith, and practice Islam more regularly. Although for most the pilgrimage of Hajj is a blessing experience, some may have felt let down and disengaged during the journey. For those who could not get into a good Ihram, or feel true belief in God on the mount of mercy; their belief in Islam and Allah may have been hindered.

C     To me, this statement means that although all of the processes of a pilgrimage are physical, the true idea is the thoughts within the pilgrim’s mind and the intention, empathy and symbolism of what they are doing in the pilgrimage.

The vast majority of Hajjis find the sacred journey to Makkah nourishing and feel they have found forgiveness from Allah. As they travel around the different rites of Hajj they cherish the experience and remember the meaning of each process, going back as far as the time of Adam and Eve. They enter a new realm as they stand before God on the Mount of Mercy, are unable to hold in their tears and are swept with emotion.

On the other hand, Hajj is purely a physical process for some pilgrims. It isn’t supposed to be, but some can’t get into the frame of mind which is intended during the pilgrimage. The journey is supposed to be emotional, deeply thoughtful and soul cleansing. To some Muslims, their belief may be slightly hampered by the fact they struggle to get into a real Ihram. They will get their money’s worth on the trip and see people from all different cultures following the same rituals, but not feel truly engaged in the experience.

Some people might argue that if you go on Hajj, and carry out the same processes as the prophets did, that is adequate in displaying your devotion to Allah and Islam. Some may say the fact that so much is physically required of them in Hajj, that alone shows they are a devout Muslim.

Personally, I fully agree with the statement, because I would say that Hajj is a journey to Makkah to carry out the rites, and a true Hajj is a deep and thoughtful journey not only to Makkah, but to the bottom of a pilgrim’s heart. Although carrying out Hajj is a blessing experience cherished by Muslims, it is not truly meaningful unless they feel a certain dedication and spiritual enrichment on their journey.