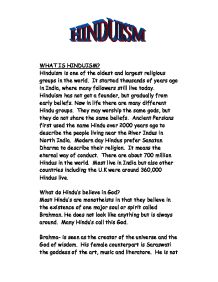 WHAT IS HINDUISM? Hinduism is one of the oldest and largest religious groups in the world. It started thousands of years ago in India, where many followers still live today. Hinduism has not got a founder, but gradually from early beliefs. Now in life there are many different Hindu groups. They may worship the same gods, but they do not share the same beliefs. ...read more.

What do Hindu's believe in God? Most Hindu's are monotheists in that they believe in the existence of one major soul or spirit called Brahman. He does not look like anything but is always around. Many Hindu's call this God. Brahma- is seen as the creator of the universe and the God of wisdom. His female counterpart is Saraswati the goddess of the art, music and literatore. ...read more.

Shiva- is the destroyer of life, yet also a creator. He is combined of good and evil. He is also shown with many hands, one pair to express the balance between life and death, another indicating the difference between good and evil. Shakti- is the goddess. She is the creative energy of male Gods. According to myths she was created from powers of various Gods. She is the goddess of good fortune, wealth, learning, music and time. Some of the Hindu festivals abound in India! Temple Festivals The Holi Festival The Dasera Festival The Divali Festival ...read more.