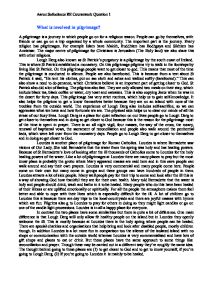 What is involved in pilgrimage?

What is involved in pilgrimage? A pilgrimage is a journey in which people go on for a religious reason. People can go by themselves, with friends or can go on a trip organised by a whole community. The important part is the journey. Every religion has pilgrimages. For example Islam have Makkh, Buddhism has Bodhgaya and Sikhism has Amristsar. The major centre of pilgrimage for Christians is Jerusalem (The Holy land) we also share this with other religions. Lough Derg also known as St Patrick's purgatory is a pilgrimage by the south coast of Ireland. This is where St Patrick established a monastery. On this pilgrimage pilgrims try to walk in the footsteps by living like St Patrick. On this pilgrimage people want to get closer to god. This means that most of the time the pilgrimage is conducted in silence. People are also barefooted. This is because from a text about St Patrick it said, "He rent his clothes, put on sac cloth and ashes and walked softly (barefooted)." ...read more.

There is an all night vigil, four masses, the way of the cross, the rosary, renewal of baptismal vows, the sacrament of reconciliation and people also walk around the penitential beds, which were left over from the monastery days. People go to Lough Derg to get closer to themselves and in doing so get closer to God. Lourdes is another place of pilgrimage for Roman Catholics. Lourdes is where Bernadette saw visions of Our Lady. She told Bernadette that the water from the spring was holy and has healing powers. Because of St Bernadette's love of looking after the ill thousands of Catholics come to Lourdes for the holy healing powers of the water. Like a lot of pilgrimages at Lourdes there are many places to pray but the most know place is probably the grotto where Mary appeared masses are said here and in this cave people can walk around and say their own prayers. Lourdes is very commercial and many people come here. ...read more.

Lourdes is in all a happy place for everyone. In contrast the two places have some similarities but there is quite a bit of difference. One main difference is that Lough Derg will only allow fit healthy people on the island but in Lourdes they openly welcome the ill. This is mostly because at Lourdes there is the holy spring where people can be healed. There are special charities and organisations that help bring and look after disabled people, mostly children though. In addition Lourdes is a lot more fun in comparison too the silence of the isolated island with no shops or communication with the outside world whereas Lourdes is very commercialised and have lots of gift shops and places to eat or drink. But these places have the same approach to some things like reconciliation and prayer. Though these may be carried out in a different way they're roughly the same idea. The thought behind going to these places are (1) to get closer to God and to get to know yourself, if you're going to Lough Derg. (2) If you're going to Lourdes it is mainly to be healed. Aaron Sofocleous RE Coursework Question 1 ...read more.