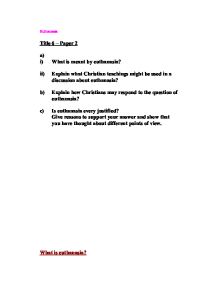 What is meant by euthanasia?

Euthanasia Title 6 - Paper 2 a) i) What is meant by euthanasia? ii) Explain what Christian teachings might be used in a discussion about euthanasia? b) Explain how Christians may respond to the question of euthanasia? c) Is euthanasia every justified? Give reasons to support your answer and show that you have thought about different points of view. What is euthanasia? People have different ideas, concepts and understandings of the word euthanasia. These must be carefully clarified. The Oxford Dictionary defines euthanasia as the following : ' The act of causing somebody to die gently and without pain, especially when they are suffering from a painful, incurable disease.' ( from Greek eu = well/good and thanatos = death ) So euthanasia means literally a good death. Some people call euthanasia 'mercy killing'. I agree with the definition given in the dictionary, I think it clearly stresses the fact that the aim of euthanasia is to give as less stress and suffering as possible to the patient. However, it does not mention the fact that can be quite an unpleasant and horrible act when the person being killed did not agree to it. There are basically two different types of euthanasia : * Active : Voluntary, Involuntary, Compulsory * Passive Active euthanasia is when you play a part in helping a person to die. ' It is referred to the planned use of treatment which is calculated to bring about death sooner than it would normally occur. ' Active euthanasia is in the form of : * Voluntary Euthanasia This is sometimes called 'physician-assisted suicide'. This is when patients,, who are mentally competent, ask for their life to be ended to prevent future pain. This is often the case in terminally ill patients e.g. in the case of Annie Lindsell. * Involuntary Euthanasia This is when patients who are not mentally competent have euthanasia performed on them. ...read more.

All these natural processes are under God's control. Some Christians think that circumstances like long illness and old age can actually help people to face death, even though death is frightening. They argue that death is an event in life, not the end of life. Jesus in the New Testament heals the sick and the dying so we should try to heal the dying as well not to end their life. God gave man ' dominion over every living thing ' ( Genesis 1;28 ). Humans have a responsibility to use God's gifts to the full. Some Christians believe that euthanasia should be allowed, because it is kinder in some circumstances to let people die than to make them carry on living. But most Christians do not accept this. But of course not all Christians oppose to euthanasia. Here is a quote from Rev. D.L.Weatherhead, a Methodist 'I believe that those who come after us will wonder why we kept a human being alive against their will when all the dignity, beauty, and meaning of life vanished. ( Quali, the quality of their lives ) and when we should've been punished by the state if we'd kept an animal alive in similar physical conditions.' I think that he is right in a lot of ways. If we can put a dog out of pain, why can't we put a human being out of pain? Why should we let patients who are suffering, especially those who are terminally ill suffer? Hans Kung, a famous theologian believes that : "...as a Christian and a theologian I am convinced that the all-merciful God, who has given men and women freedom and responsibility for their lives, has also left to dying people the responsibility for making a conscientious decision about the manner and time of their deaths'. Some Christians do support euthanasia because they recognise the pain that terminally ill patients suffer. ...read more.

'I believe that those who come after us will wonder why we kept a human being alive against their will when all the dignity, beauty, and meaning of life vanished. ( Quali, the quality of their lives ) and when we should've been punished by the state if we'd kept an animal alive in similar physical conditions.' Reverend. D.L.Weatherhead, a Methodist As I've briefly mentioned in R1, in 1996, a newspaper article ( Page ) reported that a 75 year old woman suffocated her chronically ill and house bound husband and then tried to kill herself shortly. She suffocated him with a pillow and made unsuccessful suicide attempt afterwards. It is clear that the woman killed her husband out of compassion because she couldn't bear to see her husband, who suffered a heart attack and had chronic kidney failure, live like that. The Crown accepted the woman's plea for culpable homicide because she was suffering from diminished responsibility at the time. Diminished Responsibility S.2a) states that : 'Where a person kills or is party to the killing of another, he shall not be convicted of murder if he was suffering from such abnormality of mind ... as substantially to impair his mental responsibility for his acts and omissions in doing or being party to the killing' I did a questionnaire on people of different religions and asked their views on issues concerning euthanasia. The results of the questionnaire can be seen in R2. The close figures in many of the questions show that euthanasia is a very debatable topic and it is very hard to decide whether euthanasia is justified or not. I think that euthanasia is such a complicated issue. I don't think I or anyone can ever say definitely whether euthanasia is justified or not. I think that it strongly depends on particular case and situation. If I thought that the patient had absolutely no quality of life, had no hope of recovery then maybe it is justified. It should be made sure that voluntary euthanasia is not made an easy way out for people who feels temporary suicidal. ...read more.