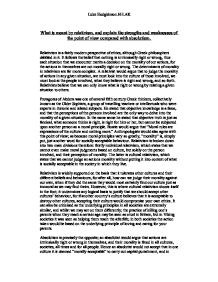 What is meant by relativism, and explain the strengths and weaknesses of the point of view compared with absolutism.

What is meant by relativism, and explain the strengths and weaknesses of the point of view compared with absolutism. Relativism is a fairly modern perspective of ethics, although Greek philosophers dabbled in it. It follows the belief that nothing is intrinsically right or wrong, thus each situation that we encounter merits a decision on the morality of our actions, for the actions in themselves are not morally right or wrong. The determinants of morality in relativism are far more complex. A relativist would argue that to judge the morality of actions in any given situation, we must look into the culture of those involved, we must look at the people involved, what they believe is right and wrong, and so-forth. Relativists believe that we can only know what is right or wrong by relating a given situation to others. Protagoras of Abdera was one of several fifth century Greek thinkers, collectively known as the Older Sophists, a group of travelling teachers or intellectuals who were experts in rhetoric and related subjects. ...read more.

It can also be criticised as the underlying principles in all societies are extremely similar, and whilst we may act on them differently; the practice of killing one's parents when they reach a certain age may be seen as cruel in Britain, but in Viking societies it was seen as helping them reach the afterlife; in both societies the action taken would be based on the underlying principle of loving and caring for your parents. Absolutism is precisely the opposite; an absolutist would argue that actions are intrinsically right or wrong in themselves, and their morality is fixed in all cultures, societies, all times and for all people. Hence an absolutist would not accept that in one culture it is deemed "morally acceptable" to carry out capital punishment, and in another it has been banned for moral reasons; an absolutist would accept one of the two points of view as the "moral" action, and dismiss the other as wrong. "Absolutists believe that the moral quality of an act is inherent in the quality of the act itself" (Jenkins). ...read more.

Also it seems that relativism is more of an excuse to avoid conflict than encourage moral behaviour. It is inconceivable that even the strongest believers of relativism would accept the opinion of their mother's murderer that it was a moral and just decision to that they made to kill her. Absolutism simply sets guidelines, and although a totalitarian absolutist rule of the world would be disastrous, the fact that we can accept differences in culture because of a similar basic moral foundation to their beliefs, (thou shalt not kill etc...). It would be impossible to maintain a society based on individual relativism, as rapists would be let rampant provided they believed in what they were doing, and murderers would be let off the hook provided they were angry enough/ drunk enough at the time of the murder to believe that their actions were moral. Absolutism is the only way to run a society successfully, and the only way to help with human rights in other countries. Luke Hodgkinson J6 LAK ...read more.