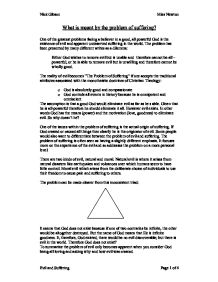 What is meant by the problem of suffering?

What is meant by the problem of suffering? One of the greatest problems facing a believer in a good, all powerful God is the existence of evil and apparent undeserved suffering in the world. The problem has been presented by many different writes as a dilemma: Either God wishes to remove evil but is unable and therefore cannot be all - powerful, or he is able to remove evil but is unwilling and therefore cannot be wholly good. The reality of evil becomes "The Problem of Suffering" if one accepts the traditional attributes associated with the monotheistic doctrines of Christian Theology: o God is absolutely good and compassionate o God controls all events in history because he is omnipotent and omniscient The assumption is that a good God would eliminate evil as far as he s able. Given that he is all-powerful therefore he should eliminate it all. However evil exists. In other words God has the means (power) and the motivation (love, goodness) to eliminate evil. So why doesn't he? One of the issues within the problem of suffering is the actual origin of suffering. If God created or caused all things then clearly he is the originator of evil. Some people would also want to differentiate between the problem of evil and suffering. The problem of suffering is often seen as having a slightly different emphasis. It focuses more on the experience of the evil and so addresses the problem on a more personal level. ...read more.

It also correctly observes that this, in turn, leads to disharmony within the human race and towards the animal world as well as damage to the environment. What it fails to explain is natural calamities and animal suffering, which most people believe existed long before man came into existence. Therefore how can man be to blame for these problems, thus making Augustians theodicy not as strong as it could have been. Augustine could explain this on the basis of a prior fall of angels, led by Lucifer. Their rebellion consisted of causing animals to prey upon one another as well as upsetting the stability of the earth's crust thus causing earthquakes and volcanoes. This view can easily be criticised on several counts. There is the problem, first raised by Schleiermacher, of why the first creatures, angels or humans, whose natures contained no flaw and who lacking nothing, would have sinned, even if they were formally free to do so, when they were in the presence of God and enjoying his happiness. The Bible does not say that man was originally in the full presence of God and John Calvin, uncharacteristically, says that man's original condition was "...weak, frail and liable to fall." In a sense the first beings did not have everything, for they were limited in power and it only requires the desire for something that cannot be obtained, like having total power to become like God, for sin to occur. ...read more.

Who knows if the Ten Commandments are correct and if we do wrong we can just pray and all is forgiven? How are we meant to know that? It is ridiculous that we are going to heaven when we do not know the line to go there. There is no atonement necessary and the end never justifies the means. Christians have rejected the Irenaean Theodicy because it ignores a lot of the key doctrines such as "The fall, Incarnation and Judgement". How can such a painful creative process be the expression of divine goodness and is all the pain and suffering worth it? It also calls into question the nature of freewill because if everyone is saved where is the free choice to decide. There is also no requirement or incentive to act morally if the outcome is eternal salvation. Finally some suggest it is inappropriate to suggest some good comes out of suffering. In conclusion, both arguments fail to find a suitable reason for the problem of evil and suffering, they mainly discuss salvation and God not wanting to interfere and letting us to decide for ourselves. However they never truly have a reason for natural evil and even moral evil why it was created or have the ability to create harm. He should have just not invented the idea to harm. Therefore neither theodicies provide appropriate evidence for the problem of evil and suffering. ?? ?? ?? ?? Nick Gibson Miss Newton Evil and Suffering Page 1 of 4 ...read more.