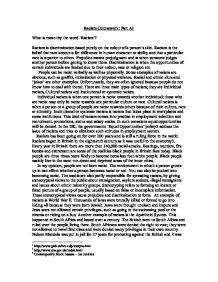 What is meant by the word 'Racism'?

Racism Coursework: Part A1 What is meant by the word 'Racism'? Racism is discrimination based purely on the colour of a person's skin. Racism is the belief that race accounts for difference in human character or ability and that a particular race is superior to others. Prejudice means prejudgment and is when someone judges another person before getting to know them. Discrimination is when the opportunities of certain individuals are limited due to their colour, race or religion etc. People can be racist verbally as well as physically. Some examples of racism are obvious, such as graffiti, intimidation or physical violence. Racial and ethnic slurs and "jokes" are other examples. Unfortunately, they are often ignored because people do not know how to deal with them1.There are three main types of racism; they are Individual racism, Cultural racism and institutional or systemic racism. Individual racism is when one person is racist towards another individual; those who are racist may only be racist towards one particular culture or race. ...read more.

These stereotypical views cause prejudice and discrimination to form. An example of racism is World War ll. Thousands of Jews were brutally killed or forced to go into hiding all because they were born Jewish. Jews were thought unclean and impure and Jews were not allowed certain privileges, such as going to the swimming pool or the cinema or riding on a bus. Another example of racism is the Apartheid System. This happened in South Africa and lasted over a century. The British went to South Africa and ruled over the people living there. South Africans were denied the right to vote; they were not allowed to travel first class and were denied many privileges in their own country. Nelson Mandela was put in jail for 27 years for protesting against the British and it was only when he was elected Prime Minister that South Africans got their freedom again. This type of white dominance also took place in India and Zimbabwe. ...read more.

They oppose and fight things like the racist institution of the police as well as organized racist groups like the Klu Klux Klan and Nazi skinheads. They believe the only way racism is going to stop is by doing it themselves4. Amnesty International (AI) is a worldwide movement of people who campaign for internationally recognized human rights5. Another anti racist group is the Catholic Association for Racial Justice (CARJ). CARJ is a charitable organization that works with Black and minority ethnic Catholics, also in Catholic Dioceses and Parishes. CARJ facilitates, encourages and empowers others to be involved and included and also to change the culture within the Church. Also the Commission for Racial Equality work for a just and integrated society, where diversity is valued. They use persuasion and our powers under the law to give everyone an equal chance to live free from fear of discrimination, prejudice and racism.6 1 http://www.gnb.ca/hrc-cdp/e/sayno.htm 2 http://www.cre.gov.uk/index.html 3 Contemporary Moral Issues - Joe Jenkins 4 http://www.geocities.com/CapitolHill/lobby/2853/ 5 http://www.amnesty.org/ 6 http://www.cre.gov.uk/ ?? ?? ?? ?? ...read more.