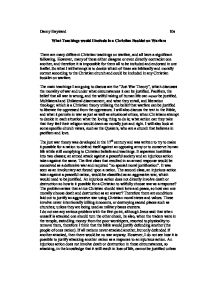 What Teachings would I include in a Christian Booklet on Warfare

Danny Hayward 10s What Teachings would I include in a Christian Booklet on Warfare There are many different Christian teachings on warfare, and all have a significant following. However, many of these either disagree or even directly contradict one another, and therefore it is impossible for them all to be included and endorsed in one leaflet. So what I will attempt is to decide which of these are biblically and morally correct according to the Christian church and could be included in any Christian booklet on warfare. The main teachings I am going to discuss are the "Just War Theory", which discusses the morality of war and under what circumstances it can be justified. Pacifism, the belief that all war is wrong, and the wilful taking of human life can never be justified. Multilateral and Unilateral disarmament, and what they entail, and liberation theology; which is a Christian theory utilising the belief that warfare can be justified to liberate the oppressed from the oppressors. I will also discuss the text in the Bible, and what it permits in war as just as well as situational ethics, when Christians attempt to decide in each situation what the loving thing to do is; what action can they take that they feel their religion would deem as morally just and right. ...read more.

oil prospects; killing their civilians and treating them like animals, all that the neighbour could do is make a complaint to a league of nations such as the UN. This is I think a view more sensible if choosing a form of pacifism from the bible is the idea of relative pacifism; less absolute pacifists choose other codes of behaviour. Some pacifists disagree with the use of force and urge moral persuasion but also encourage passive resistance to achieve their goals. Critics of this view contend that even passive resistance provokes frustration, resentment, and further oppression on the part of an aggressor, relative pacifists, If faced with the situation involving a weak nation being attacked by a larger nation out of greed could choose, as the morally just thing to do, to defend the weaker nations people and stop the stronger nation from overrunning them, a good example of this theory of theory is that, although Jesus said if you are hit you should present your other cheek rather than strike back; he was willing to defend the interests of the poor, and of his own father; by physically sending the swindling tradesmen out of the temple he went to worship in, he showed that he was ...read more.

whether they wither or starve, can rise up, to strive for peace and the prosperity of their citizens, and for a lasting peace between them and other countries, as a last resort. I would include both multi and unilateral forms of disarmament, as a way to move towards lasting peace, and set a peace-loving example to other nations. What I am would like my leaflet to express is Christian a society in which a country can defend oneself against an aggressor, while still wanting peace and not being an aggressor themselves and be able to justify their actions using the Bible and Gods teachings. If all nations observed this anyway, there would be no war in the first place. I feel it is plain that if I agreed with the theory of absolute pacifism then; even if each nation but one complied, it is possible that the entire world would end ruled by the one who refused to join this peaceful society, and the entire planet would finish in a position exactly the opposite to the one originally intended. I feel a Christian booklet incorporating these theories could be satisfactorily justified by the bible in all situations and still create a safe world for everybody inhabiting it. ...read more.