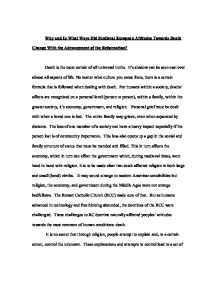 Why and In What Ways Did Medieval European Attitudes Towards Death Change With the Advancement of the Reformation?

Why and In What Ways Did Medieval European Attitudes Towards Death Change With the Advancement of the Reformation? Death is the most certain of all universal truths. It's shadow can be seen cast over almost all aspects of life. No matter what culture you come from, there is a certain formula that is followed when dealing with death. For humans within a society, deaths' affects are recognized on a personal level (person to person), within a family, within the greater society, it's economy, government, and religion. Personal grief must be dealt with when a loved one is lost. The entire family may grieve, even when separated by distance. The loss of one member of a society can have a heavy impact especially if the person lost is of community importance. This loss also opens up a gap in the social and family structure of status that must be mended and filled. This in turn affects the economy, which in turn can effect the government which, during medieval times, went hand in hand with religion. It is to be made clear that death affected religion in both large and small (local) circles. It may sound strange to modern American sensibilities but religion, the economy, and government during the Middle Ages were not strange bedfellows. ...read more.

Luther said, "the deceased who have died in the Lord are holy...they rest and are at peace, as Isaiah 57 says that the just...go in peace when they die, as if to bed...and so they are called the sleepers, and their death is called sleep throughout the Scriptures (Koslofsky, p.37)". Luther had earlier, in 1521, written On the Misuse of Mass. In this publication he denounces intercessory masses as " a diabolically successful trick which has brought matters to a point where the mass is held mostly for the dead, although it was given and instituted as a consolation only for living Christians (Koslofshy, p.34)". These reformers sought to separate the living from the dead completely. That meant no work on behalf of the dead, no intercessions, no vigils, no masses. A Nuremberg jurist said, "after death a person is freed from all human authority and stands in God's Judgement alone (Koslofsky, p.39)". Salvation by faith alone. With this doctrine, one can see the obvious conflictions it has with the RCC. There was no longer any need for intercessions, indulgences for the dead, or consecrated ground. According to Lutheran doctrine, death should be dealt with by quiet meditation and personal prayer. Prayer after death should be for the living, it should express the living mourners' acceptance of God's will. ...read more.

Death for those of dishonorable reputation changed as well. In Medieval times, criminals that were sentenced to death by hanging, or what have you, but if they died before execution, they still received the punishment. Why hang a dead man to punish his soul when humans have no hand in his judgment after his death anyway? So the ritual abuse of dead bodies of criminals began to stop and was reflected in the criminal codes of the times. Those of dishonorable reputation were still given burials without singing, church bells, or loved ones. As one can assess, the Reformation had a lot to do with peoples changing attitude towards death. It all started with the challenge made on the cult of Purgatory. Without the fiery torment of souls to pray for, Catholic credibility dropped. Intercessions may have been a useful grieving technique for some, but the Protestants let it be known that it is was not right for all. The timing of the Plague could not have been more in tune with the song of those seeking reform within the RCC. The reform of the RCC was not being done fast enough, or extensively enough, for some. Death was the issue most prevalent at the time. People began to look at death in different ways. People began to seek alternative explanations and methods of coping. The changing social climate affected peoples' attitudes towards religion in general, as well as issues closely related, like death. ...read more.