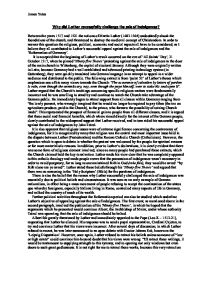 Why did Luther successfully challenge the sale of indulgences?

Why did Luther successfully challenge the sale of indulgences? Between the years 1517 and 1521 the actions of Martin Luther (1483-1546) undoubtedly shook the foundations of the church, and threatened to destroy the medieval concept of Christendom. In order to answer this question the religious, political, economic and social aspects all have to be considered, as I believe they all contributed to Luther's successful appeal against the sale of indulgences and the 'Reformation of Germany'. It is accepted that the beginning of Luther's revolt occurred on the eve of 'All Saints' Day', 31 October 1517, when he pinned 'Ninety-five Theses' protesting against the sale of indulgences to the door of the main church in Wittenberg, the capital of electoral Saxony. Although they were originally written in Latin, because Germany had a well established and advanced printing technology system (in Guttenberg), they were quickly translated into German language in an attempt to appeal to a wider audience and distributed to the public. ...read more.

Luther made his view clear that he was completely opposed to this catholic theology and made people aware that the possession of indulgences wasn't necessary in order to avoid purgatory, for as long as one maintained faith in God (sola fide), they would be saved: "by faith alone are ye saved". Luther stated these beliefs through his 'Ninety-five Theses' and argued that there was no reasoning in the 'Holy Scripture' (Bible) for the purchase of indulgences. There is also the belief that the reason why Luther successfully challenged the sale of indulgences was essentially due to political beliefs and circumstances. It was seen as an early example of German nationalism, in effect being a mass movement of people refusing to accept the continuation of the status quo whereby foreigners, especially Italians living in Rome, controlled many aspects of life in Germany, and milked the country of much of its wealth. Further political activities throughout the Reformation period can also be studied which underline Luther's objective of appealing against the sale of indulgences. ...read more.

The final political event was in April 1521, when Luther was once again requested to attend a debate at 'The Diet of Worms', in the presence of Charles V. He continued to stand firm and adamant in his beliefs and was consequently later found guilty of heresy by the Emperor. In conclusion, I believe that the reason why 'Luther successfully challenged the sale of indulgences' was due to the combination of religious, political, economic and social aspects and circumstances. However, after thorough study of the events from 1517-21, I believe that the main reason for Luther's success was due to his steadfast political actions and religious views which therefore provided the German people with an alternative spiritual belief and concept other than the previously unquestioned Catholic teaching and ideology. In addition, I declare that the view which suggests that the reason for Luther's support was due to financial benefit for the German people, must not be overlooked for it is also likely that he attracted support because it provided the opportunity for the people of Germany (especially the electors) to increase their autonomy. James Yates ...read more.