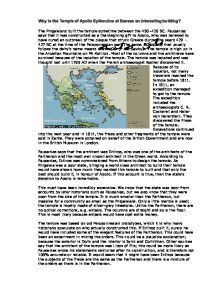 Why is the Temple of Apollo Epikourios at Bassae an interesting building?

Why is the Temple of Apollo Epikourios at Bassae an interesting building? The Phigaleians built the temple sometime between the 450-420 BC. Pausanias says that it was constructed as a thanksgiving gift to Apollo, who was believed to have cured an outbreak of the plague that struck Greece during the years 429 - 427 BC at the time of the Peloponnesian war. The name Epikourios that usually follows the deity's name means the Helper or the Saviour. The temple is high up in the Arcadian Mountains on Mt Kotilion. Most of the columns and the architrave have survived because of the isolation of the temple. The temple was isolated and was thought lost until 1765 AD when the French archaeologist Bocher discovered it. Because of its isolation, not many travellers reached the temple before 1811. In 1811, an expedition managed to get to the temple. The expedition included the archaeologists C. R. Cockerell and Haller von Hallerstein. They discovered the frieze of the temple. Excavations continued into the next year and in 1814, the frieze and other fragments of the temple were sold in Zante. They were obtained on behalf of the British Government and are now in the British Museum in London. Pausanias says that the architect was Iktinos, who was one of the architects of the Parthenon and the most well known architect in the Greek world. ...read more.

Later columns had leaves creeping up the bell, alternating between low and high in effect creating two rows. This could be the prototype of Corinthian columns. The orientation of the temple is another interesting feature. The temple's main axis is North-South. Possible explanations for this particular orientation could be that it is facing Delos (believed to be the God's favourite place on Earth), or it is facing the land of the Hyperboreans, from where Apollo started his journey. The temple may not be totally dedicated to Apollo - other sources say that it was a memorial to the people who died during the plague. The temple is facing north because to face east would mean to face the rising sun. The rising sun symbolises a new beginning; a new beginning which the victims of the plague wouldn't see. Hades is said to be a dark place, which is the opposite of day light. The temple may have been built over another previous one that faced north due to the lay of the land. It is an unusual shape because it may have been built to house the shrines surrounding it, like the Erecthion. NB. The coloured circle shows where the cult statue would have been housed (in the Adyton) The Adyton was just an added room behind the Cella. ...read more.

could represent the upholders of order or the antidote of evil (i.e. the plague). Apollo is considered the god of order, healing, medicine, arts, archery, music and intellectual pursuit. Both versions of the stories have similar outcomes. The detail about Niobe being the Pelops' sister is significant because the chariot race with Pelops is depicted on the Parthenon. The temple of Apollo at Bassae is interesting because it has many stories and myths linked to it. There is a lot of speculation around it regarding the pediment, why they used the columns, the orientation, the adyton, the purpose of the temple, who built it (Iktinos or Libon of Elis), why the particular subjects were used for the frieze. The pediment, the Corinthian capital, the orientation, the subjects on the frieze, and the plague are all linked by a strange deathly connotation. The pediment could be about Niobe and the massacre of her children. The Corinthian capital was inspired, supposedly, by Acanthus leaves growing around a pot on a grave stone. The unusual orientation of the temple could suggest mourning for the dead of the plague. The frieze shows civilised man defeating barbarism - Herakles could represent Apollo and the Amazons could represent the plague. However, Apollo could be an invisible influence to the Greeks depicted. There is plenty of mystery and speculation surrounding the temple, which is what makes the temple incredibly interesting to study. ...read more.