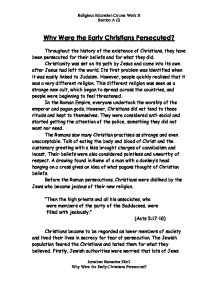 Why Were the Early Christians Persecuted?

Why Were the Early Christians Persecuted? Throughout the history of the existence of Christians, they have been persecuted for their beliefs and for what they did. Christianity was set on its path by Jesus and came into its own after Jesus had left the world. Its first problem was identified when it was easily linked to Judaism. However, people quickly realised that it was a very different religion. This different religion was seen as a strange new cult, which began to spread across the countries, and people were beginning to feel threatened. ...read more.

Their beliefs were also considered pointless and unworthy of respect. A drawing found in Rome of a man with a donkey's head hanging on a cross gives an idea of what pagans thought of Christian beliefs. Before the Roman persecutions, Christians were disliked by the Jews who became jealous of their new religion. "Then the high priests and all his associates, who were members of the party of the Sadducees, were filled with jealously." (Acts 5:17-18) Christians became to be regarded as lower members of society and lived their lives in secrecy for fear of persecution. ...read more.

Stephen. He met his death for being a Christian and was killed by the Jews. Stephen preached to the Sanhedrin and spread the word of God. This stirred up trouble and hatred for the people did not want to be taught differently. Therefore, Stephen was killed. "They all rushed at him, dragged him out of the city and began to stone him." (Acts 7:57-58) The persecution of early Christians and the Church has been necessary for the growth and strengthening of Christianity. Although many Christians suffered at the hands of their persecutors, we can only say that Christianity has benefited from it and given it a solid foundation with the world today. Religious Education Course Work II Section A (i) Jonathan Bonacina 5Re2 Why Were the Early Christians Persecuted? ...read more.