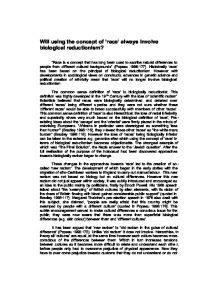 Will using the concept of &amp;#145;race&amp;#146; always involve biological reductionism?

Will using the concept of 'race' always involve biological reductionism? "Race is a concept that has long been used to ascribe natural differences to people from different cultural backgrounds" (Popeau 1998:177). Historically 'race' has been based on the principal of biological reductionism. However with developments in sociological views on constructs, advances in genetic science and political creation of ethnicity mean that 'race' will no longer involve biological reductionism. The common sense definition of 'race' is biologically reductionist. This definition was highly developed in the 19th Century with the idea of 'scientific racism'. Scientists believed that races were biologically determined, and debated over different 'races' being different species and they were not sure whether these 'different races' would be able to breed successfully with members of other 'races'. This common sense definition of 'race' is also hierarchical, the idea of racial inferiority and superiority where very much based on the biological definition of 'race', Pre-existing ideas about the 'savage' and the 'oriental' were firmly placed in the minds of colonising Europeans. ...read more.

skin colour) between them and 'different cultures'. It has been argued that 'new racism' is "old racism in the guise of cultural difference" (Popeau 1998:175). Unlike 'old racism' it does not involve hierarchies, in theory all 'cultures' are equal, at the same time however each culture becomes more conscious of the differences between them. Which in turn increases tensions between cultures as it becomes more difficult to relate and understand each other, before people only had to overcome prejudice of physical appearance. Now they have to over come prejudice towards customs that they do not understand or do not agree with because they do not understand (e.g. fasting, arranged marriages, polygamy). "Culture is conceived along ethnically absolute lines" (Gilroy 1993:24) and therefore it is through culturally based 'new racism' that initially politicians coined the term ethnicity (subsequently politically spun into ethnic minorities and multi culturalism). "'Ethnicity' is the more polite and less controversial term for 'race' in the thinking of certain bureaucrats" (Popeau 1998:166). ...read more.

and as a form of identification. However some sociologist that "we should reject the concept altogether [as being] an ideological construct: its use only serves to give respectability to discredited racist ideas" (Bradley 1996:120). The sociological argument against this idea is that class and gender are also "constructs; since constructs inform the way people think and act in relation to others the effects of 'race' are very real" (Bradley 1996:121). Therefore although we may not always use the term 'race' in relation to biological reductionism it appears however we will at present continue to use the term with different connotation attached to it. Even though there are no biological 'races', there are still clearly different cultures. In reality we need a term to be able to appreciate, identify and understand differences between cultures, currently ethnicity is more appropriate and accurate than 'races' however with the original 'radicalised' connotations that inevitable attached to the term perhaps to its use and value, as a concept will be questioned. ...read more.