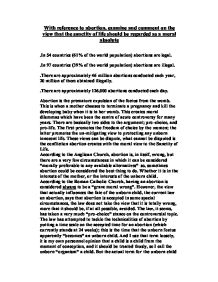 With reference to abortion, examine and comment on the view that the sanctity of life should be regarded as a moral absolute

With reference to abortion, examine and comment on the view that the sanctity of life should be regarded as a moral absolute .In 54 countries (61% of the world population) abortions are legal. .In 97 countries (39% of the world population) abortions are illegal. .There are approximately 46 million abortions conducted each year, 20 million of them obtained illegally. .There are approximately 126,000 abortions conducted each day. Abortion is the premature expulsion of the foetus from the womb. This is when a mother chooses to terminate a pregnancy and kill the developing baby when it is in her womb. This creates moral dilemmas which have been the centre of acute controversy for many years. There are basically two sides to the argument; pro-choice, and pro-life. The first promotes the freedom of choice by the women; the latter promotes the un-mitigating view to protecting any unborn innocent life. These views can be dispute, what cannot be disputed is the confliction abortion creates with the moral view to the Sanctity of Life. According to the Anglican Church, abortion is, in itself, wrong, but there are a very few circumstances in which it can be considered "morally preferable to any available alternatives" so, sometimes abortion could be considered the best thing to do. Whether it is in the interests of the mother, or the interests of the unborn child. According to the Roman Catholic Church, having an abortion is considered always to be a "grave moral wrong". However, the view that actually influences the fate of the unborn child, the current law on abortion, says that abortion is accepted in some special circumstances, the law does not take the view that it is totally wrong, more that it should be, if at all possible, avoided. The law, it seems, has taken a very much "pro-choice" stance on the controversial topic. The law has attempted to tackle the technicalities of abortion by putting a time scale on the accepted time for an abortion (which currently stands at 24 weeks); this is the time that the unborn foetus apparently "becomes" an unborn child. ...read more.

From the first moment of his [or her] existence, a human being must be recognised as having the rights of a person - among which is the inviolable right of every innocent life." What this says is that from the moment of conception, the option to abort the pregnancy is considered absolutely and totally wrong. The Church goes on to say that this principal has never changed and is unchangeable. This clearly means that; according to the Catholic Church, with reference to abortion, the sanctity of life should be regarded as moral absolute. But what about the Church of England? This stance is very much more a contradicting one. On the one hand, the Church says that it shares the view of the Catholic Church in that "abortion is gravely contrary to the moral law". And on the other hand, according to the Church's governing body, the General Synod, "The Church of England combines strong opposition [to abortion] with recognition that there can be - strictly limited - conditions under which it may be morally preferable to any available alternative." Two conflicting principals are apparent here, one saying that abortion is totally morally wrong, the other saying that sometimes it may be understandable. The mother is considered in a very central way also; "The mother of the unborn child needs all possible understanding and help, especially if factors connected with the pregnancy are difficult. Successive resolutions have urged the need for compassion for the mother (1966) and have emphasised that she has interests which need to be taken into account" This is very confusing because the whole point of a moral absolute is that there are no circumstances in which that conflicting moral dilemma can be accepted. But here is the Anglican Church, the Church of England, conflicting its own ideals. If you believe that God set out the moral laws of Christianity, and those laws are still apparent to this day by all factions of Christianity, then is God himself contradicting his principals? ...read more.

This kind of love is not sexual or romantic; it focuses on the Greek love agape. This unconditional, unselfish love, one unites people Christians and non-Christians. Fletcher tried to highlight that the right thing to do is not necessarily the same in all circumstances by using examples. He used the case of a mentally disturbed woman who was left pregnant as a result of rape. If she were to follow the rules of abortion and carry on bearing the child, this would be morally wrong. In this case, to have an abortion would be the loving thing to do, where as in other cases, it may not. This shows that every situation is different and there is not a single right answer for any two circumstances. For Fletcher, nothing was absolutely right or wrong. So one could say that in Fletchers book, abortion is, once again, neither right nor wrong. So if Situation ethics, Utilitarianism and the Church of England all say that in some circumstances abortion can be considered the morally right thing to do, then what reason do we have, at all, to uphold the view of the Sanctity of Life. The only guidelines or example we have of a system which does uphold the view of the Sanctity of Life is Catholicism. So, unless it turns out that Catholicism is, intrinsically, the only moral way for human beings to live, then abortion is always wrong. Because I know for a fact that there are a lot of people who are not Catholics in England, but these people still have doubts about the morality of Abortion, so it is reasonable to believe that this doubt is in our very nature. Therefore, and I am not a Catholic, I still believe that abortion is wrong, and that the sanctity of life should be respected at all times. If this were denied, then not only would we be committing a "grave moral wrong" in the eyes of Catholicism, but we would be contradicting our very nature. By Nathan jervis 11D1 ?? ?? ?? ?? ...read more.