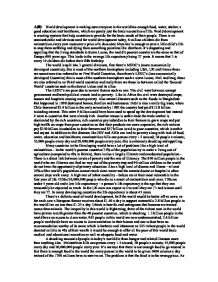 A)ii) World development is making sure everyone in the world has enough food, water, shelter, a good education and healthcare, which are purely just the basic necessities of life. World development is creating systems that help countries to provide for the basic needs of their people. There is an unmistakeable and obvious need for world development today, 6 million children die from malnutrition every year moreover a price of a chocolate Mars bar is enough to save a little child's life to stop them suffering and dying from something pointless like diarrhoea. It's disgusting and appalling that the living standards in Sierra Leone, the world's poorest country are the same as that of Europe 600 years ago. This leads to the average life expectancy being 37 years. It means that 3 in every 10 children die before their fifth birthday. The world is split into 3 general divisions, first there's MEDC's (more economically developed countries); this is most of the northern hemisphere including USA, UK and France these are sometimes also referred to as First World Countries, then there's LEDC's (less economically developed Countries) this is most of the southern hemisphere such a sierra Leone, Mali and Iraq; these are also referred to as Third world countries and lastly there are those in-between called the 'Second World' countries such as the Soviet Union and its allies. ...read more.

Of the 20,000,000 people who die as a result of malnutrition each year, 75% are under 5 years old and a low life expectancy - a person's life expectancy is the age that they can reasonably be expected to reach. In the UK men can expect to live until they are 73 and women until they are 77. In many developing countries the life expectancy is about 45 years. There's a definite need of world development, half the world would be better off as cows, as for each cow a European farmer receives about �1.40 a day in support meanwhile 2.8 billion people in the world live on less than �1.25 a day. I think is horrific and outrageous that humans are treated worse than animals. The inequality in this world is frightening; three of the richest men in the world have private wealth greater than the 48 poorest countries, which is shocking. 1.3 billion people in the world have no access to clean water, 963 people in this world are now undernourished, 2.6 billion people worldwide have no access to clean sanitation in their homes and one in four have no accommodation worthy of its name which is barbaric and inhumane as 225 richest people in the world donated as little as 4% of their wealth it would be enough to offer all the poor of this world basic medical and educational amenities as well as adequate food and water. ...read more.

As we are all part of the same world and we are all equal and deserve the same rights. World development is the way not only to bringing world prosperity but also world peace. People of the world are interdependent and rely on each other for certain things, if we want Sudanese to grow cotton for our clothes, we have to show some concern in helping them to produce enough food for themselves. I think rich countries have a responsibility to help the poor, as the worlds major religions believe that everyone has a right to live a good life and benefit from the worlds recourses and be treated equally and not be treated different. People's quality of life should not depend on what side of the globe they were born on, rich countries should be able to do what they can to remove these problems. We have recourses, money and skills to help countries and help other people's lives be better 'Feed a man a fish; feed him for a day. Teach a man to fish; feed him for a lifetime'. World development can provide poor people in the world a chance of a good life which everyone deserve and is entitled to. This also helps to promote human dignity and self esteem and reduce the need for countries to borrow from others. If we do thousands of lives will be saved and the quality of millions of lives will improve. We can do this. This is why there is a need for world development. ...read more.