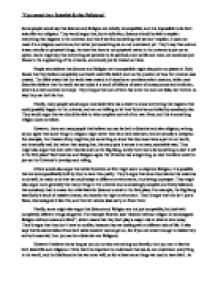 'You cannot be a Scientist &amp; also Religious'. Discuss

Some people would say that Science and Religion are wholly incompatible, and it is impossible to be both scientific and religious. They would argue that, by its definition, Science should be able to explain everything that happens in the universe, and that if we find something that we can't explain, it does not mean it's a religious occurrence, but rather just something we do not understand yet. They'd say that science is seen wholly on physical things, the idea that there is non-physical matter in the universe is just not an option. Some might say that everything we perceive to be spiritual, such as life and mind, are somehow just flukes in the engineering of the universe, and should just be treated as tricks. People who believe that Science and Religion are incompatible might also point out places in Holy Books that they believe completely contradict scientific belief, such as the question of how the universe was created. ...read more.

However, there are many people that believe you can be both a Scientist and also religious, as long as you agree that some things in religion might rather than be a hard statement, but are actually a metaphor. For example, the Creation Story might be just something to show that God does have a part in our world, and is actually real, but rather than saying that, this story puts it across in an easy, accessible way. They might also argue that even with theories such as the Big Bang, surely there has to be something to start it off in the first place? Both Science and Religion agree the Universe had a beginning, so God therefore could've just set the Universe's development rolling. Others would also argue that while Evolution at first might seem to disprove Religion, it is possible that we were specifically built by God to have this quality. ...read more.

They'd argue that they don't have to conflict, because they are dealing with a different side of life. It also says that fundamentalism from both sides however cannot get on, but if you are smart enough to realise they are both essential, then you can be a Scientist and Religious. However I believe that as long as you do not take everything too literally, then you can in fact be both Scientific and religious. I think that it is important to understand that we do not understand everything in the world, and the likelihood is that we never will, so for at least some things we need to have faith. As long as we give both sides are fair and reasoned analysis, I do believe that you can be both a Scientist and Religious. ?? ?? ?? ?? 'You cannot be a Scientist & also Religious' ...read more.