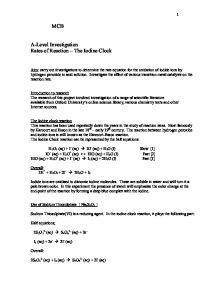 MCB A-Level Investigation Rates of Reaction - The Iodine Clock Aim: carry out investigations to determine the rate equation for the oxidation of iodide ions by hydrogen peroxide in acid solution. Investigate the effect of various transition metal catalysts on the reaction rate. Introduction to research The research of this project involved investigation of a range of scientific literature available from Oxford University's online science library, various chemistry texts and other Internet sources. The Iodine clock reaction This reaction has been used repeatedly down the years in the study of reaction rates. Most famously by Harcourt and Esson in the late 18th - early 19th century. The reaction between hydrogen peroxide and iodide ions is still known as the Harcourt-Esson reaction. The Iodine Clock reaction can be represented by the half equations: H2O2 (aq) + I- (aq) --> IO- (aq) + H2O (l) Slow [1] IO- (aq) + H3O+ (aq) - HIO (aq) + H2O (l) Fast [2] HIO (aq) + H3O+ (aq) + I- (aq) --> I2 (aq) + 2H2O (l) Fast [3] Overall: 2H+ + H2O2 + 2I- --> 2H2O + I2 Iodide ions are oxidised to diatomic iodine molecules. These are soluble in water and will turn it a pale brown color. In this experiment the presence of starch will emphasize the color change at the end-point of the reaction by forming a deep blue complex with the iodine. Use of Sodium Thiosulphate [ Na2S2O3 ] Sodium Thiosulphate(VI) is a reducing agent. In the iodine clock reaction, it plays the following part: Half equations; 2S2O32- (aq) --> S4O62- (aq) + 2e- I2 (aq) + 2e- --> 2I- (aq) Overall: 2S2O32- (aq) + I2 (aq) --> S4O62- (aq) + 2I- (aq) The Thiosulphate has the effect of reducing iodine to iodide ions. Since the Iodine Clock Reaction is basically the conversion of iodide ions to iodine, the Thiosulphate actually does the reverse. ...read more.

This is signified by a change in the solution color from clear to deep blue. (8). Immediately as the reaction reaches this point, stop the stopwatch. Record the time to the nearest second. (9). Repeat this reaction using the same volumes of reactants to obtain a second result. If there were massive variations (>20seconds) it would be advisable to repeat again to eliminate a possible rogue result. (10). Repeat steps 1 to 9 for the remaining volumes of independent variable (in this case 0.1 Molar KI - 4ml, 6ml, 8ml, 10ml and 12ml) adjusting the distilled water content of the solution to keep the overall solution volume at a constant 200ml (respectively 175ml, 173ml, 171ml, 169ml and 167ml). (11). In the same fashion, perform sets of experiments to investigate the effects of varying the concentration of the other reactants: Potassium Iodide and Sulphuric Acid. The various concentrations and volumes for these investigations are listed in Tables 1.2 and 1.3 above. (12). Once all values have been obtained it is necessary to plot graphs of rate against concentration (or volume) limiting reagent (independent variable). To calculate reaction rate: Reaction Rate = 1/REACTION TIME To calculate reactant concentration in the solution: using n = cv Concentration reagent (in solution) = Moles reagent Total solution volume (constant 0.2dm) Where: Moles reagent = Concentration x Volume Units: Concentration: moldm-3 Volume: dm Rate: seconds-1 (13). The graph Rate against Concentration (or volume) should be plotted with ?-axis representing Concentration and y-axis representing Reaction Rate x103 (by raising the reaction rate it will make the numbers easier to work with). (14). To determine the order of the reaction with respect to the concentration of a particular the shape of the graph it produces should be compared with the example below: Figure 2.1 Green line represents 2nd order Red line represents 1st order Blue line represents 0th order The overall order can then be deduced by addition of the singular orders w.r.t. ...read more.

+ e- - Fe2+ (s) Eo /V = +0.77 The following then occurs: Fe3+ (aq) + e- - Fe2+ (s) Eo /V = +0.77 H2O2(aq) + 2H+(aq) + 2e- - 2 H2O (l) Eo /V = +1.77 Hence the catalyst, Fe3+, is regenerated. According to this rule Zn2+, Cr3+, Fe2+ and Cu2+ would not catalyse the oxidation of Iodide ions since they are not strong enough oxidising agents. However it is possible that Fe2+ worked using this reaction path: Fe3+ (aq) + e- - Fe2+ (s) Eo /V = +0.77 H2O2(aq) + 2H+(aq) + 2e- - 2 H2O (l) Eo /V = +1.77 Iron (II) ions are initially oxidised by the Hydrogen Peroxide, which creates water and Iron (III) ions: I2 (aq) + 2e- - 2I- (aq) Eo /V = +0.54 Fe3+ (aq) + e- - Fe2+ (s) Eo /V = +0.77 The Iron (III) ions then oxidise Iodide ions back to iodine whilst regenerating the catalyst. Despite the Eo value suggesting that Fe2+ will not function as a catalyst, the reaction steps simply occur initially in a different order. To explain the fact that Cu2+ ions worked as a catalyst: When considering tabulated electrode potential values one must keep in mind that for the published values it is assumed that the ions are in aqueous solution in their aqua-complex, and that the values are performed at exactly STP. If these ions are bonded differently or have a different ligand in place of the aqua group then the Eo value will be altered dramatically. It is therefore possible that the Eo value of Cu2+ was changed so much by the temperature in the laboratory and the presence of non-aqua ligands that it enabled these ions to catalyse the reaction by increasing their oxidising power. It is more likely that the Cu2+ ions formed a complex with iodide ions which accounts for this change in Eo value - perhaps the complex [CuI4]2-. Mg2+ ions, Zn2+, and Cr3+ ions did not function as catalysts since their Eo values lie outside the range defined by the Iodine clock reaction, 0.54V --> 1.77V. ...read more.