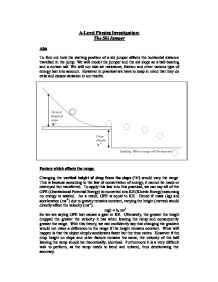 A-Level Physics Investigation: The Ski Jumper Aim To find out how the starting position of a ski jumper affects the horizontal distance travelled in the jump. We will model the jumper and the ski slope as a ball bearing and a curtain rail. We will not take air resistance, friction and other various type of energy lost into account. However in practical we have to keep in mind that they do exist and causes variation in our results. Factors which affects the range: Changing the vertical height of drop from the slope ('h') would vary the range. This is because according to the law of conservation of energy, it cannot be made or destroyed but transferred. To apply this law into this practical, we can say all of the GPE (Gravitational Potential Energy) is converted into KE (Kinetic Energy) assuming no energy is wasted. As a result, GPE is equal to KE. Hence if mass (kg) and acceleration (ms-2) due to gravity remains constant, varying the height (metres) would directly affect the velocity (ms-1). mgh = 1/2 mv2 So we are saying GPE lost causes a gain in KE. Ultimately, the greater the height dropped the greater the velocity it has when leaving the ramp and consequently greater the range. With this theory, we can confidently say that changing the gradient would not make a difference to the range if the height remains constant. ...read more.

First we have to set-up the apparatus as above. We will need to measure the height of the table from the ground and the height of the slope from the table. By adding the height of the slope from the table to the height of the table from the floor, we could find out the overall drop height mentioned earlier on. The value I obtained for the height of the table was 0.93m from our preliminary test. 2. After getting the apparatus ready, we will start the experiment right away. We will be dropping various heights on the slope, from 5cm to 40cm with 5cm intervals. To do this, we hold the ball according to the height on the rail and release it. It will then travel down and into the sand tray leaving a mark similar to half a sphere. I will be repeating each drop three times and then taking an average to ensure accuracy. 3. We will measure from the centre of the mark to the end of the sand tray closer to the edge of the table. By adding this value we obtain with 15cm, we will acquire the final value of the range. Experimental errors and Uncertainties There are superficial errors with the ruler I will be using. The edge of the ruler I will be using is not 0cm. The 0cm indictor is actually 0.3 cm from the edge. ...read more.

To resolve this problem, I have to check whether the sand tray is back into its position after impact. As a result, I decide to use carbon paper instead next time when recording the range. Also, when dropping the ball, it will not have been dropped from the exact point every time, as this is virtually impossible. To overcome this problem, some kind of release mechanism would ensure that the ball is dropped from the same point on the slope every time. All of these have virtually no effect on our result or conclusion at all. Instead there is something we could alter that would have assisted us in concluding the formula. For example, a working condition where air resistance is zero. In other words, working in a vacuum environment. As a result, the condition we are working in is more similar to the assumptions we have made using the formula. With common sense, we can expect this condition would yield a greater range. With no air resistance, I can say that our actual range would be greater because the velocity leaving the ramp is getting closer to the calculated value using the idea that potential gravitation energy lost is equal to the kinetic energy gain. Basically, more of the GPE is converted into kinetic energy. As a result when plotting graph2 again with the new conditions, we would expect a steeper gradient or a gradient that is nearly the same as the one we have calculated. Ultimately, it can give us stronger evidence that the formula is spot on, even though the degree accuracy we currently have is sufficient. ...read more.